Rumor has it that during this time of the year the Dalnakya Caverns are particularly full of rich resources. Dive into the land of plenty and obtain the materials needed to craft awesome weapons!

Lands of Plenty is a unique-type event in Final Fantasy Brave Exvius. It consists in exploring Dalnakya Cavern with several stages of difficulty; after the player completes each of them, they will be rewarded with a crafting recipe that allows them to synthesize various swords than can be crafted with materials obtained mostly from any exploration dungeon. The reward for the highest difficulty is the recipe for Shining Splendor, which requires event-only materials.

Sword crafting is done in multiple tiers. Players cannot craft the highest tier sword immediately: to craft Shining Splendor, the sword from previous tier is required and so on. The most basic sword, the Broadsword, can be purchased for cheap in a couple of towns, including Town of Mitra. While some of the materials (e.g. Lumber, Copper Ore) could be farmed on Earth Shrine - Exploration, the event-exclusive material Cavern Ore can only be obtained at the highest difficulty event dungeon.

To avoid random encounters while farming, players should equip the Charm Bangle to reduce the amount of encounters and speed up explorations. Since the Reduce Encounter passive ability can be stacked, it is recommended to bring several units with this ability (even the friend unit). 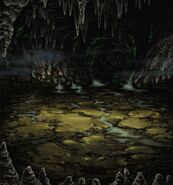