The Land Turtle, also known as the LandTurtl in fan translations and Great Tortoise in Final Fantasy Record Keeper, is the boss of the Altar Cave and the first boss in Final Fantasy III. In the 3D remakes, the player fights it with only Luneth in the party, but the battle is similar regardless of the version.

Considering the player is at low levels, the Land Turtle has strong attacks that can easily kill any party member with a critical hit. The most straightforward way of defeating this boss is by using the SouthWinds obtainable in this cave, but it can also be defeated with simple attacks, since it's only a strong foe to parties at starting levels.

The most simple way of defeating the Land Turtle is by using the Antarctic Winds found at the Altar Cave. The party consists of only one character, and thus the Land Turtle's strength has been reduced, but its critical hits can still be dangerous.

If Luneth is at level 4, he can easily defeat the Land Turtle with normal attacks while dual-wielding a Knife and a Longsword.

Land Turtle, known as "Great Tortoise", is the boss for Altar Cave. The Target Score associated with it requires the player to not be KOed during the battle against it. 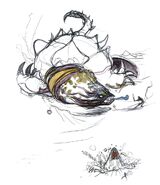 Luneth using an Antarctic Wind on the Land Turtle.

Retrieved from "https://finalfantasy.fandom.com/wiki/Land_Turtle_(Final_Fantasy_III)?oldid=3274218"
Community content is available under CC-BY-SA unless otherwise noted.