Lamia Matriarch is an enemy fought at Arubboth on floors 2 and 5, exclusive in the Game Boy Advance and later remakes. They can be dangerous foes as they utilize Charm IX and Sleep XVI, as well as can inflict Sleep with their physical attacks. They are valuable for their rare item drops, in particular the Ribbon.

Lamia Matriarch is an enemy fought at the Tower of Babil. They are only slightly stronger than the Lamia, and fight in the same manner, utilizing Entice as a counter to attacks. They are not difficult foes to defeat.

Lamia Matriarch is an enemy fought at the overworld during the Lunarians Tale, and in the Challenge Dungeons for Kain, the Lunarians, and Yang. They fight as in the previous game, but can now drop various valuable items and equipment pieces.

The Lamia Matriarch appears as an enemy and as an obtainable signet. Her use has become exclusive to Aemo. 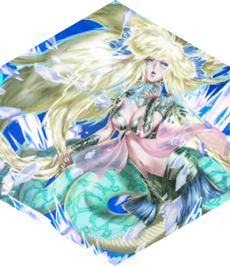 The Glacial Lamia Matriarch appears as an ice-elemental summon. She was previously obtained through the summon drawing shop. In the 2017 release of the game, her use has become exclusive to Aemo.

The Glacial Lamia Matriarch allows the wielder to use the following abilities depending on the signet's rank. The following are bonus abilities granted to Aemo: 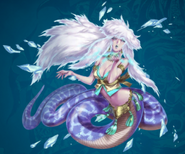 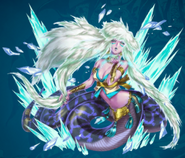 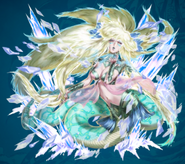 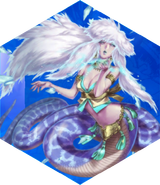 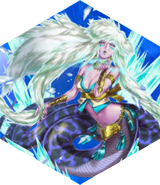 This gallery is incomplete and requires Final Fantasy Dimensions II added. You can help the Final Fantasy Wiki by uploading images.