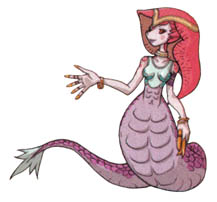 Lamia in Final Fantasy Tactics Advance are red snake-like creatures that have similar qualities to Lamia from previous Final Fantasy games. Their skills are notorious for inflicting a myriad of status effects.

Later characteristics attributed to her are similar to that of succubi, in that the lamia seduces men, enticing them in order to feed on their blood. It is also said they reside in towers or secluded areas and have magical abilities.

Retrieved from "https://finalfantasy.fandom.com/wiki/Lamia_(Tactics_Advance)?oldid=3020423"
Community content is available under CC-BY-SA unless otherwise noted.