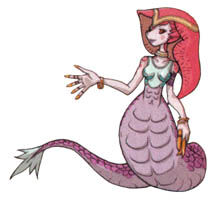 The Lamia in Final Fantasy Tactics Advance is a red snake-like creature with similar qualities to Lamia from previous Final Fantasy games. Its skills are notorious for inflicting a myriad of status effects.