Lamiae are a race of Beastmen native to the Near East in Final Fantasy XI. Though they are serpentine in appearance, their upper bodies resemble those of Hume women. This contributes to the belief that they are an artificial species, created by unscrupulous alchemists through the combination of other organisms. Whatever their origin, the Lamiae are less numerous than other beastmen. They compensate for this disadvantage by enchanting the bones of fallen soldiers to build an army. Bow-wielding Lamiae are known to sneak into towns at night and hunt members of the Enlightened Races to replenish the ranks of this undead swarm.

Merrows are a close relation of the Lamiae, a type of amphibious chimera. Although they reside in the Cyan Deep, Merrows occasionally respond to the Lamiae's requests and venture to the scene of battle accompanied by hordes of undead raised from watery graves. Merrows can also use their enchanting voices to draw in even the most experienced sailors.

Lamiae come equipped with a job, and readily use the spells granted them (if any) in addition to their special attacks. 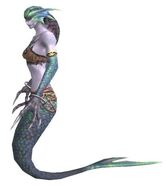 Artwork of a Lamia's weapons.

[view · edit · purge]Merrows are the Scottish and Irish Gaelic equivalent of the mermaid and mermen.

[view · edit · purge]The German Nix and Nixe (and Nixie) are types of river merman and mermaid who may lure men to drown, like the Scandinavian type, akin to the Celtic Melusine and similar to the Greek Siren. Nixes in folklore became water sprites who try to lure people into the water. The males can assume many different shapes, including that of a human, fish, and snake. The females with the tail of a fish. When they are in human forms, they can be recognized by the wet hem of their clothes. The Nixes are portrayed as malicious in some stories but harmless and friendly in others.