Flute with Lamia's power dwelling inside.

Lamia's Flute is a weapon for Eiko in Final Fantasy IX, being the second flute. It teaches her the white magic spells Float, which allows targets to avoid ground-based attacks; Stona, which heals Petrify and Gradual Petrify; and Silence, which attempts to disable a target's magic-use.

Lamia's Flute is found inside the Iifa Tree, in the third inner roots area

. It is also bought from the Mist Continent weapon shops after the party returns from the Outer Continent for 3800 gil. It is also sold in the Mogshop in Ipsen's Castle.

Lamia's Flute's damage dealt with a normal Attack is determined as follows everywhere but within Ipsen's Castle:

The damage is then modified by variables like Eiko's row position and the enemy's Protect. Under Mini, her Bonus would be 1. If Eiko equips Healer, damage is converted to healing. 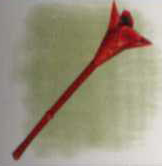 Most of Eiko's flutes are named after a magical being of some sort. [view · edit · purge]In Greek mythology, Lamia was a beautiful Libyan queen who turned into a child-eating demon. She is often referred to as having the lower half of a snake and sometimes a large mouth (lamia in Greek means "large shark", while laimos means gullet).