The Lalafell are a folk both rotund and diminutive. Small by any race's standards and possessed of a childlike countenance, it proves difficult for non-Lalafell to gauge an individual's age with any degree of accuracy. Originally an agricultural people inhabiting the fertile islands of the south seas, they found their way to Eorzea via the burgeoning trade routes. Lalafell are welcoming of outsiders, and share prosperous relations with all of the other races of Eorzea.

The Lalafell are a gnome-like race from the seas south of Eorzea in Final Fantasy XIV. They somewhat resemble the Tarutaru from Final Fantasy XI but their bodies are taller and do not necessarily need to have the Tarutaru's distinctive dark-colored noses. The race consists of the Plainsfolk, which live in thatched-roof homes and have great hearing, and the Dunesfolk who live in the desert and herd animals.

The Lalafell were originally a group of agriculturalists inhabiting the fertile islands of the south seas. With the introduction of transmarine commerce, they soon found their way to Eorzea via trade routes. They are now one of the more populous races and are well established throughout the region, though they remain averse to cold climates.

The short, rotund builds of the Lalafell belie an incredible agility, and their seemingly feeble legs are capable of carrying them long distances over any terrain. Many among them are also known for possessing highly developed and cunning intellects.

The Lalafell place a great deal of significance on familial bonds, but are by no means unfriendly to outsiders. This is evidenced by the fact that they continue to share prosperous relations with all of the other races of Eorzea. 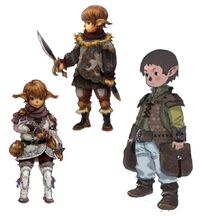 The flat landscapes of the Plainsfolk's home islands are dotted with the clan's traditional thatched huts, beneath which lie intricate networks of underground passageways. Their distinct hair coloration—a myriad of earthy and grassy tones—mimics their native environment, and their long, pointy ears are said to be able to detect the faintest scampering of the prairie's various fauna. Their skin tones tend generally toward the fairer, lighter side of the spectrum, though as with many races this is not universal.

This inclination toward grasslands and plains naturally led the bulk of Eorzea's Plainsfolk to Vylbrand's wide meadows; it has been strongly implied that they made up a major portion, perhaps the majority, of the population of Nym, and even today the greater majority of Plainsfolk can be found in and around Limsa Lominsa. They are somewhat more diasporized than the Dunesfolk, though, and some Plainsfolk can be found in nearly every corner of the land, from North Shroud to the southern tip of Thanalan, with quite a few to be found in Ul'dah. The sole exception is Ishgard—due to the general Lalafellin dislike for cold, outside of the adventuring cadre it is rare indeed to encounter them anywhere in Coerthas, especially today.

Perhaps the most distinctive aspect of Dunesfolk culture is its traditional dwellings—structures affixed to the backs of large beasts of burden. The luminous eyes of the Dunesfolk are the result of a glossy, protective layer which covers the pupil, an evolutionary response to the glaring sunlight of their home region. Many individuals wear a small gemstone on their forehead, representing their zodiacal sign. Dunesfolk have a particularly wide variation in skin tone - while many tend toward the darker side of the spectrum (as they live in a desert), several prominent Dunesfolk, such as Nanamo Ul Namo, are among the fairest-skinned individuals in Eorzea.

While the traditional dwelling of the Dunesfolk is on beasts of burden, the Dunesfolk are also the founders of the city of Ul'dah. The vast majority of Dunesfolk a traveler encounters in modern Eorzea will be from that city - if you encounter a Dunefolk on the bridge-streets of Limsa or angrily haggling for a chocobo outside of Gridania, odds are they'll be from Ul'dah. Ul'dah's prosperity means that very few Dunesfolk have settled away from the city-state.

The Dwarves are the First's parallel version of the Lalafell race, who are rarely seen without their face-obscuring helmets and beard-like scarves. Dwarves consider removing their helmets in front of anyone other than close relatives a taboo punishable by exile.

In this parallel world, they live near Mt. Gulg in small villages, having a similar lifestyle to the beast tribes from the Source. They're divided into two clans: the Tholls from Tomra, and the Goggs from Komra.

The following table shows the attribute modifiers for Lalafells. These are flat modifiers and do not scale with level, only making a noticeable difference at low levels and very quickly becoming negligible as these attributes climb into the hundreds and thousands.

Much like the Hyur, Lalafell possess one of the two documented high-detail CG models that never went on to be used in any cinematic or promotional material after the launch of the game; in the case of the Lalafell, this is of the Plainsfolk male, who can be seen above.

The Lalafell of The First resemble the Dwarves of previous Final Fantasy games in appearance and behavior, including the use of the signature greeting of Lali-ho.

Due to their height, the Lalafell are the only playable race that have access to certain exclusive small places, these being two dwarf houses in Kholusia. 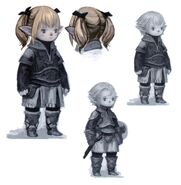 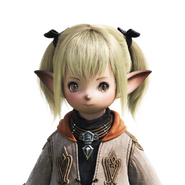 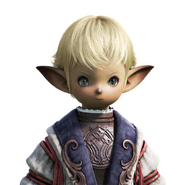 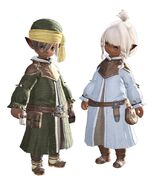 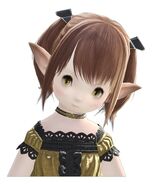 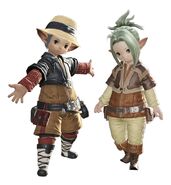 The "signature" Lalafell White Mage in the "End of an Era" cinematic.