A greater healer than Sraphim. This Esper cures fatigue and restores HP.

Lakshmi, also known as Starlet, is an esper in Final Fantasy VI who can be acquired as a magicite.

Lakshmi has a human female appearance. She has long light brown hair and wears a dark blue robe, and is surrounded by golden and angelic imagery.

Lakshmi's sprite was censored for the North American SNES version. The original Japanese sprite has been used in all English releases since. The alterations made include moving the blue material higher up fully covering her breasts, and editing the strip of cloth on her waist into a full dress.

Lakshmi's magicite came into the possession of the Jidoor Auction House in the World of Ruin, and they sold it to Owzer. Upon purchasing it, he was overcome with a desire for a painting of the esper. He sought numerous artists, but none had the skill to satisfy him. He then heard about Relm's great skill, and brought her to his mansion and put her to work. While she was painting though, the demon Chadarnook was enticed by the magicite and possessed the painting.

The party found Relm and destroyed the Chadarnook, and Owzer explained about Lakshmi's magicite to them. Desirous to be rid of it, as it had only caused him trouble, he told them to take it with them. 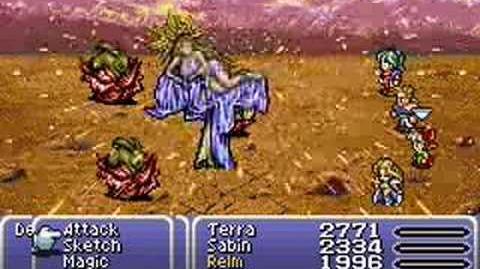 Lakshmi costs 74 MP to summon. Her ability is Alluring Embrace (Group Hug in the original Super NES and PlayStation version), which restores HP to the entire party with a spell power is 34. When leveling up, she provides a +2 boost to Stamina.

Lakshmi is useless as a summon. She is only slightly more effective than a Cura spell, but costs three times as much MP to use. Her level up bonus is also of dubious use.

Lakshmi teaches several important spells at high learn rates. She teaches Curaga at a slower rate than Phoenix, but if the player puts off acquiring Phoenix until much later, Lakshmi is the only way to learn it.

A sidequest concerns a possessed painting of a woman in Altissia called Lakshmi that initiates a battle with Chadarnook when approached. 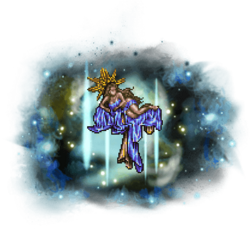 Lakshmi is one of the Rank 5 holy-elemental magicite bosses in Record Keeper, as the physical magicite in parallel to Madeen as the magical magicite. She takes cues from Chadarnook for her attacks, able to use Poltergeist, Phantasm, Lullaby, and Entice, as well as her own Alluring Embrace, which heals Lakshmi and grants her Haste and Regen status.

Lakshmi's magicite has the passive abilities Healing Boon and Dampen Dark, which boosts the power of the party's healing attacks and reduces the dark-elemental damage they take. Her summon attack Ultra Alluring Embrace deals holy-elemental magic damage to all enemies that can break the damage cap, and grants the party a barrier that nullifies the next status ailment they would suffer. Her attacks are Rake, Holy, and Holyja; Holyja deals holy-elemental magic damage to one target that can break the damage cap, and at level 99 is the only attack Lakshmi will use.

[view · edit · purge]Starlet is a young actress or singer, especially one working her way up through the star system.