Look, the faeries are here

A lively man who uses various guns and weapons in battle. He's quietly become the mediator with his happy-go-lucky attitude.

Laguna Loire is the third representative of Final Fantasy VIII introduced in Dissidia 012 Final Fantasy. Laguna was once a soldier of the Galbadian Army alongside Kiros and Ward, whose backstories were explained through flashbacks and playable dream sequences. The brotherly soldier quit the army, became a journalist, starred in a movie, and eventually became the new president of Esthar, where he crossed paths with the recipients of his experiences while assisting him in his battle against the sorceress Ultimecia.

In the game's story mode, his rival is the Cloud of Darkness.

He appears as an adult who wears a blue jacket with rolled sleeves over a white T-shirt with brown cargo-pants, black boots, fingerless gloves and a large black belt. He has long black hair, which is combed over to the right side. His eyes are green and he wears dog-tags and a silver earring for all three costumes.

Laguna's first alternate costume, "Galbadian Soldier", is his uniform while serving in the Galbadian army.

. He wears a dark blue bodysuit with armor covering his chest and hips.

His second alternate costume, "President", is his casual attire while serving as President of Esthar.

in Squall's time in Final Fantasy VIII when he is the president of Esthar. He wears a light blue button-up shirt with brown pants and sandals. He also has his hair tied back.

His DLC outfit, "Sorceress's Knight", is his appearance as Zefer when he starred in a movie in Final Fantasy VIII.

. He dons a suit of armor with a purple skirt over the thighs. This outfit was released for download in Japan on April 7. 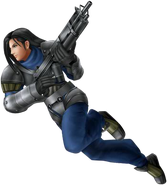 Laguna wields multiple firearms, with his default one being his signature machine gun. His other weapons are a shotgun, a long-range rifle, a bazooka, a missile launcher, and a large laser cannon based on the Ragnarok airship. Save for the machine gun, when he carries in his hands unless using another weapon, Laguna summons and dismisses his weapons as needed when he attacks. In his EX Mode the weapons turn gold, a reference to the Aura status in Final Fantasy VIII. 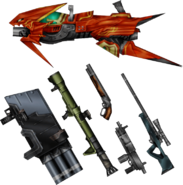 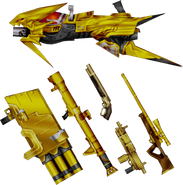 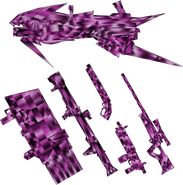 Anyway, I plan on findin' a way to get back home, munchkin infestation or not. I'm just doin' what I gotta do to make that happen. I'm not 'serving' anyone, or anything like that. Sure, I might not be a god, but I figure I have SOME hope. I mean, that's all a soldier like me's really got, right?

Laguna is the big brother figure of the group, always cheerful, optimistic and carefree. He likes to joke around yet is understanding of those around him.

Laguna is a Warrior of Cosmos, acting like a big brother to the other Warriors and mediating them thanks to his cheerful and carefree nature.

Early in the cycle, Laguna went exploring and looking for treasure with Bartz and Jecht. Although they got lost they enjoyed the adventure, and Bartz took the time to challenge Laguna to learn how to copy his attacks. Laguna sparred with Bartz, repeatedly using his Ragnarok Blade attack so Bartz could learn how to use it himself. The three found the treasure they were looking for and returned to their friends.

Later, Laguna accompanied Squall and Firion on patrol, giving the latter the 'wild' rose they found. After Firion runs off to find the others, Laguna proceeds to talk to Squall about their new friends; like Zidane, whose tail he pulled during their meeting. He also tries to talk him out of being a loner. When Squall questions the point of making friends, Laguna explains that even if they were both from the same world, they would be separated eventually.

When Laguna and Vaan go missing, Squall and the Onion Knight go to search for them, before Squall returns to their meeting spot. After an encounter with Cloud, Squall thinks he sees Laguna near where Cloud went, but Laguna calls out to him from behind. Squall thinks the Laguna he thought he saw was just a shadow, unaware it was the first sighting of a manikin. Some time later, Laguna was traveling with Tifa as Cosmos recalled her warriors to Order's Sanctuary. Laguna, looking at his map upside-down, got lost, and was eventually found by Vaan, Kain, Yuna, and Lightning, who corrected him. The six arrived at sanctuary together after the rest of Cosmos' warriors had already been waiting.

After arriving at the sanctuary and receiving his dormant crystal from Cosmos, Laguna travels with Lightning, Vaan, and Tifa, but they end up getting separated when they are attacked by Kuja and Kefka and the manikins. While on his own, Laguna encounters and fights the Cloud of Darkness.

When their fight is over, Laguna starts having leg cramps after staring at the Cloud of Darkness in an awkward way. After telling her he is helping Cosmos rather than serving her, Laguna's words pique the Cloud of Darkness's interest and she reveals where the manikins are coming from. Cloud of Darkness reveals this information as a potential suicide mission, and is curious about the manner of death that Laguna would choose for himself.

Later on, Laguna and Vaan find Yuna with an unconscious Tidus after the Emperor has kidnapped Jecht. They manage to cheer her up, and the three return to Cosmos and talk to Lightning and the Warrior of Light. Here, Laguna informs everyone that he knows where the manikins are coming from and volunteers to help Lightning in destroying the manikins.

Laguna then travels with Lightning, Vaan and Yuna to the portal, reuniting with Kain and Tifa along the way. Eventually reaching the Empyreal Paradox, Laguna fights alongside Lightning, Vaan, Yuna, and Tifa against Garland, the Emperor, the Cloud of Darkness, Kefka, and Ultimecia with Laguna fighting the Cloud of Darkness a second time. Afterwards, they, along with Kain, fight a multitude of manikins. They managed to close the portal the manikins are emerging from, but fall in battle. As Shinryu takes Cosmos and her other warriors to the next cycle of conflict, Laguna and his friends fade away in front of the Warrior of Light.

Laguna is a Tactical Gunner, using a variety of firearms to fight from a range. His Bravery attacks are focused on continuously zoning and pressuring the opponent to control their movements and shoots projectiles that come at them from different directions, and he can alter some of their effects by tapping or holding

and/or using the analog stick to aim while firing. His HP can hit at different ranges and can also have their button held to delay their firing. His HP attacks all have a long start-up lag, making Laguna reliant on his HP attacks to distract the opponent and give him openings to land an HP attack. His Bravery damage is also lacking, as many of his Bravery attacks are easily blocked or dodged, and don't deal much damage. 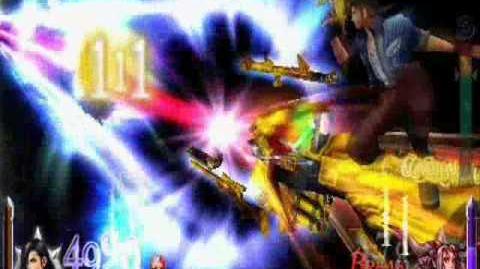 Laguna's EX Mode is Look, the faeries are here, where his weapons turn gold, a reference to the Aura status in Final Fantasy VIII. In his EX Mode Laguna gains the ability "A Faeries' Miracle" that lets him cancel out the lag from his Bravery attacks by attacking again right after, letting him assault opponents much faster.

Laguna's EX Burst is Desperado, where he blasts his opponent with a rocket launcher, then throws a grenade and swings on a rope before attacking with the machine gun. A cross-hair target appears and the player has to press

to fire at the opponent, using the analog stick to keep it centered on them as they move around the screen, filling a damage meter. If the player is successful, Laguna ends the EX Burst with Ultimate Ragnarok Cannon where he calls all of his weapons together to concentrate energy and fires an enormous laser beam at the opponent with the detonating grenade dealing HP damage. Failure to fill the meter will result in the grenade exploding while Laguna poses.

Concept art of the Machine Gun.

Concept art of the Sniper Rifle.

Concept art of the Rocket Launcher.

Concept art of the Bazooka.

Concept art of the Ragnarok Cannon.

Concept art of the Machine Gun in EX Mode.

Concept art of the Shotgun in EX Mode.

Concept art of the Sniper Rifle in EX Mode.

Concept art of the Rocket Launcher in EX Mode.

Concept art of the Bazooka in EX Mode.

Concept art of the Ragnarok Cannon in EX Mode.

While Dissidia 012 was in development, Laguna was also considered to be in Kingdom Hearts Birth by Sleep, also in development at the time, as the secret head of the Mirage Arena. It was decided that he only ought to appear in one of the games, and thus he was left out of Birth By Sleep in favor of Dissidia 012.

Laguna is voiced in Japanese in Hiroaki Hirata and in English by Armando Valdes-Kennedy. He shares his same Japanese voice actor with Balthier.

Laguna's declaration when he enters EX Mode, "you've awakened the genius," serves as a pun on the ancient Roman mythological meaning of "genius", which referred to a guardian spirit of a person. As Laguna's EX Mode name refers to when he was imbued with Squall's power, "genius" can thus be taken to refer to Squall's Guardian Forces that Laguna was able to use as well when he tapped into Squall's power.