An icon sprite of Laguna appears in the PocketStation memorycard file manager.

Laguna appears in Dissidia 012 Final Fantasy as a new warrior fighting for Cosmos. He acts as a brotherly figure to the other warriors, mediating them and offering advice, but is at odds with Lightning and Squall, who dislike his carefree attitude. Laguna and Vaan travel together but are separated before Laguna meets the Cloud of Darkness.

Denying his attraction to her and admitting he fights only to return home and not out of a personal interest in Cosmos's victory, the Cloud of Darkness is intrigued by him and tells him where the manikins are coming from, desiring to see if he will seek them out knowing it is a suicide mission. Laguna relays this information to the other Warriors of Cosmos, and six of the survivors find the portal the manikins are coming from and sacrifice themselves to close it, Laguna among them.

Though Laguna interacts with Squall in the Reports, neither is aware of their true connection.

Laguna's first alternate outfit is his Galbadian soldier uniform, giving him a blue outfit with gray armor on the arms and torso. His second alternate outfit is his attire while president of Esthar, a light blue shirt with khaki pants. As a bonus fourth outfit available for download, Laguna dons his Sorceress Knight armor from the film he stars in one of the flashbacks in Final Fantasy VIII, a full suit of plate armor with a purple skirt-like covering over the thighs.

Laguna appears as a playable character.

Though this mercenary seems destined to be little more than a comic footnote in history, fate has far more in store for him. No tragedy can bring him to his knees, though; he walks ever onward with his head held high.

Laguna is an unlockable character, and is unlocked by collecting Gold Crystal Shards.

He is an Offense and Support oriented character. His Limit Break, Desperado, deals damage in proportion to his Strength and Stamina.

Laguna appears in Pictlogica Final Fantasy as a playable character.

Laguna is a playable character who could be recruited during the Challenge Event A Meeting Beyond Time as the First Time Reward for completing the event's Trabia Ravine stage on Classic difficulty. 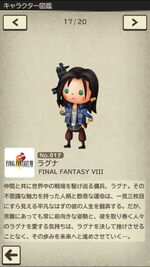 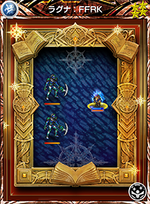 Laguna appears in the Final Fantasy Trading Card Game and is represented in four Ice-elemental cards, one of them being Promotional. In his regular cards, he is depicted in his Dissidia artwork and render, his Final Fantasy VIII artwork and his Yoshitaka Amano artwork. His promotional card features the promotional poster where he is opposite from Squall.

Laguna appears on a Triple Triad card with different values than the card in Final Fantasy VIII, in the version available via Final Fantasy Portal App. 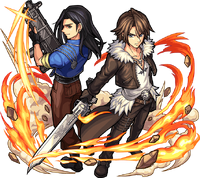 Laguna appears alongside Squall as part of the 2018 Final Fantasy collaboration.

This section about a character is empty or needs to be expanded. You can help the Final Fantasy Wiki by expanding it.
Final Fantasy VIII characters
Retrieved from "https://finalfantasy.fandom.com/wiki/Laguna_Loire/Other_appearances?oldid=3237308"
Community content is available under CC-BY-SA unless otherwise noted.