Detects by Sight
Detects by Smell
List of Ladybug Enemies
The Ladybug is a family of enemies in Final Fantasy XI.

These large, beetle-like insects were once found in forested areas throughout Quon. Unveiling their encased wings for flight causes the ladybug's brilliant red shell to splay, displaying two dorsal, jet-black circles. These resemble a pair of oversized eyes, and are intended as a warning to potential predators. The ladybugs were viciously hunted by adventurers during the Crystal War in order to develop new armor, eventually seeming to disappear from Vana'diel. For many years, it was generally accepted that no ladybugs existed in Vana'diel after the end of the Crystal War.

However, upon the recent development of wool grease by ambitious cooks and synergists, and the subsequent distribution of said product into the hands of Beastmasters, skilled Beastmasters have been able to call living ladybugs to their sides in present-day Vana'diel, known as Dipper Yuly. This shows that although Ladybugs can no longer be found in the wild, they are still living in hiding in present-day Vana'diel, perhaps in areas that have been closed to adventurers since the end of the Crystal War, such as Vunkerl Inlet and Grauberg.

During the daytime, these insects experience a variety of unidentifiable status boosts. At night, their aggressive nature is replaced with a more passive temperament. 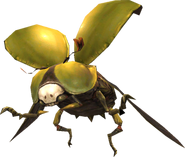