A lovely axe that is also an object of worship. Just holding it increases focus.

Labrys (ラブリュス, Raburyusu?) is a recurring weapon in the Final Fantasy series.

It is said that deep within the unsettled regions of Florem, hunting is seen as a sacred act that provides humans with sustenance and sends the souls of beasts peacefully to the Celestial Realm. This axe is imbued with spiritual energy that makes it especially potent against such beasts, ensuring a swift and painless departure. 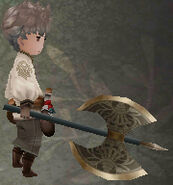 Labrys is the term for a symmetric doubleheaded axe originally from Crete in Greece, one of the oldest symbols of Greek civilization.