La Noscea (ラノシア, Ranoshia?) is a region in Final Fantasy XIV in the realm of the Source, on the sub-continent of Vylbrand, and on the continent of Eorzea. It is home to the City-state of Limsa Lominsa. La Noscea is a beautiful area, containing wild, rocky landscape rife with hills and plateaus.

One of the great City-States of Eorzea. Limsa Lominsa is a traditional thalassocracy, with power lying in the hands of the ruling party and its leader, the Admiral.

Grasslands along the southern part of Vylbrand, with a farmstead in the Cedarwood area. Once a continuous peninsula, damage during the Calamity caused Gods' Grip to become an island, now linked by a bridge.

These grasslands lie along Galadion Bay across from the city-state, with an agriculture settlement at Summerford. A sheer cliff formed along the Nym River, prompting the construction of ramps.

A stretch of coastal terrain still recovering from the Calamity. The western most area became a major stronghold for the Sahagin beast-tribe after a tidal wave devastated it. An immense lighthouse sits on the Isle of Umbra.

An area divided into beachfront property on the coastline, and a rainforest separated by hills. A Garlean outpost was secretly constructed in the area.

Foothills surrounding Bronze Lake. The area is split into the Oakwood in the west and flooded shallows to the east.

These hills lie on the outskirts of Kobold territory, with their furnaces easily visible in the landscape. Ruins of the ancient city-state of Nym can be found here.

A residential district along the southeastern coastline, reserved by the Maelstrom for adventurers.

A training facility that allows gladiatorial matches aboard a vessel that hit the rocks.

La Noscea was popular in early 1.0 because of its various leveling spots for low level players. It also had Dodos, the enemy that dropped Wind Crystals and Wind Shards which could be sold for a high price. However, only the Marauder's Guild was relevant to combat-loving adventurers, as both the Musketeer and Arcanist classes were dummied for the original release.

As Ul'dah became both the geographical and commercial center for adventurers, Limsa Lominsa and La Noscea saw very little activity due to the teleportation limitations and the lengthy boat ride to the island. By the time airships had been released, most adventurers remained in Ul'dah to gather for events and sell items.

Notably, both Titan and Leviathan primal battles had allegedly been finished early on, but the dual earthquake/tsunami in 2011 gave the developers pause, and they were ultimately never released for the sake of taste. The addition of Shposhae and a few other quests brought some interest back to La Noscea, but both the Black Shroud and Thanalan were blessed with myriad class quests, Primal battles, and proximity to the more accessible and popular city-states. With the exception of rich cobalt veins, mahogany trees, and packs of raptors (the most valuable metal, wood, and leather before 1.20) in Camp Iron Lake, La Noscea as a whole fell into obscurity.

Of the regions redesigned for A Realm Reborn, La Noscea bears the most open-world zones at six in all, although early concept art suggested Outer La Noscea was originally intended to be part of Upper La Noscea. Due to Limsa Lominsa containing the Arcanist and eventually Rogue guilds, as well as more evenly distributed content, La Noscea is overall more popular than it was in 1.x. In particular, Eastern La Noscea remains popular for players at the early 30s level range due to levequests and fair distribution of FATEs for solo leveling.

"On Westerly Winds" plays in most areas of La Noscea. "Ruby Sunrise" and "Ruby Moonrise" plays in Costa del Sol. "Saltswept" plays in Aleport. "Kiss of Chaos" plays in the Halfstone area. "Fleeting Rays" plays in the Floating City of Nym. "Quick as Silver, Hard as Stone" plays in the U'ghamoro Mines. "The Land Breathes" plays during battles in La Noscea.

A port in La Noscea. 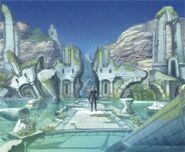 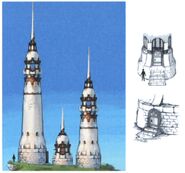