Men cry not for themselves, but for their comrades.

LOVELESS is an epic from the world of Final Fantasy VII that has made several cameo appearances in the Compilation of Final Fantasy VII and plays a major role in Crisis Core -Final Fantasy VII-. Originating as a book of poetry, the story has been adapted into a play and has a street named after it in Midgar. The story focuses around three men who set out on a quest to find the fabled "Gift of the Goddess". Posters and billboards for the play show a woman with the words "Open 6/25 6:00" and "18:00", and many posters also include the text "My Bloody Valentine". 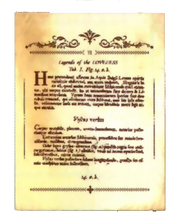 Prologue
When the war of the beasts brings about the world's end
The goddess descends from the sky
Wings of light and dark spread afar
She guides us to bliss, her gift everlasting

Act I
Infinite in mystery is the gift of the Goddess
We seek it thus, and take to the sky
Ripples form on the water's surface
The wandering soul knows no rest.

Act II
There is no hate, only joy
For you are beloved by the goddess
Hero of the dawn, Healer of worlds

Dreams of the morrow hath the shattered soul
Pride is lost
Wings stripped away, the end is nigh

Act III
My friend, do you fly away now?
To a world that abhors you and I?
All that awaits you is a somber morrow
No matter where the winds may blow

My friend, your desire
Is the bringer of life, the gift of the goddess

Act IV
My friend, the fates are cruel
There are no dreams, no honor remains
The arrow has left the bow of the goddess

My soul, corrupted by vengeance
Hath endured torment, to find the end of the journey
In my own salvation
And your eternal slumber

Legend shall speak
Of sacrifice at world's end
The wind sails over the water's surface
Quietly, but surely

Act V
Even if the morrow is barren of promises
Nothing shall forestall my return
To become the dew that quenches the land
To spare the sands, the seas, the skies
I offer thee this silent sacrifice

Posters of LOVELESS are scattered around Midgar, first seen in Sector 8, and their appearance makes apparent that the name derives from the 1991 album by My Bloody Valentine, an Irish shoegaze band. Loveless is regarded as their best work, and is generally highly regarded, usually doing well in British music press polls. The woman on the LOVELESS posters resembles My Bloody Valentine's singer/guitarist Bilinda Butcher. In the PlayStation 3 technical demo, and the cutscene at the end of Crisis Core -Final Fantasy VII-, the scene that features the poster is remade, and the poster has been changed.

When leaving the Sector 7 Slums (with Tifa in the party), Cloud can converse with a guard who mentions they have tickets to see 'Loveless'. Near the end of the game, Cloud can talk to Cid, who mentions he went to see the play and fell asleep, being awoken in time for the final act, and he quotes the following from the final scene, between a woman and her lover, who is leaving:

"Do you really have to leave?"
"I promised. The people I love, are waiting."
"...I don't understand. Not at all. But... please take care of yourself."
"Of course... I'll come back to you. Even if you don't promise to wait. I'll return knowing you'll be here."

This bears a slight resemblance to the opening lines of Final Fantasy VIII.

In Advent Children Complete, LOVELESS is only hinted at; a poster is present in the opening before the scene cuts to Denzel and Marlene, and another poster is seen behind Rude when he and Reno appear at Edge to challenge Yazoo and Loz. A LOVELESS poster is seen when Aerith Gainsborough walks into Midgar with a flower basket. And finally, a LOVELESS billboard falls and hits Rude on the head before Reno falls on him, knocking him down momentarily. If the shot is paused at the right moment, the head of a woman can be seen on the billboard. The woman resembles Aerith's menu portrait in Final Fantasy VII.

In the beginning of Episode One, a billboard for LOVELESS can be seen while the camera pans Sector 8. It is located in multiple locations in the sector as the game unfolds.

LOVELESS posters can be sighted in Edge during Chapter 3. The posters are placed outside on the streets, and inside houses.

Genesis Rhapsodos is obsessed with the story of LOVELESS and recites quotes from it during each encounter Zack has with him. Genesis envisions himself and his two SOLDIER First Class comrades, Sephiroth and Angeal, as the three men foretold in the epic, and thus hopes to find the fabled "Gift of the Goddess". The phrase "My friend, the fates are cruel. There are no dreams, no honor remains" is told to Zack early by Genesis referring to the fateful duel between the two friends in the story of LOVELESS, making a parallel to himself and Angeal.

The stage play of LOVELESS is apparently largely based on acts II and III, being told from the viewpoint of the girl who helps the male lead. To make it closer to the original context, it contains additional scenes of two friends. Kunsel emails that he has seen the stage production and quotes the last line:

Of course...I'll come back to you. Even if you don't promise to wait. I'll return knowing you'll be here.

More of LOVELESS is engraved upon stone tablets within the cave in Banora Underground where Zack faces Genesis for the last time. The tablets tell a short story of a group of three friends who go in search for the "Gift of the Goddess" taking on the roles of a "Hero", a "Traveler", and a "Prisoner". The Prisoner escapes and is critically wounded, only to end up in the care of a woman from the enemy faction whom he falls in love with. He lives a peaceful life, but is tortured by the promise he made to his friends.

The final chapter of LOVELESS is lost, with only a single line remaining: "Even if the morrow is barren of promises, nothing shall forestall my return", although there are many in-world theories on the story's denouement.

When Genesis is extracted by Deepground, the missing final act is added to the LOVELESS book, by the means of the Lifestream marking it down on paper and a black feather finishing the text. The context of this scene is enigmatic, meaning either several things; this is either a line Genesis thought up himself (making it unlikely to be the original missing act) or it is, in fact, the original missing act Genesis finally found, and wrote into his book. Further compounding this, is its significance to its appearance in Genesis's Digital Mind Wave Limit Break Apocalypse, revealed long before its recital by the end of the game and its addition to the official collection. The Crisis Core Complete Guide states the biggest mystery is what happened to the world after receiving the "Gift of the Goddess".

Genesis attempts to reenact LOVELESS with him as the Hero, Zack as the Prisoner, the goddess statue as the Goddess, and the statue's Goddess Materia as the Gift of the Goddess. Genesis tells Zack that through his S-Cells and the Buster Sword, he carries the legacies of Sephiroth and Angeal with him to the duel, thus reuniting the three friends. Genesis thinks that by fighting Zack he would obtain the Gift of the Goddess, and be cured of his degradation. Zack wonders if re-creating LOVELESS in this manner was always his plan, but the developers clarify that Genesis only began working to this goal after Hollander's promises of a cure failed him.

After the battle Genesis regains his pride as a SOLDIER, and is cured from degradation by the power of the Lifestream. Genesis realizes he is not the Hero, but the Prisoner, and by accepting this receives the Gift of the Goddess—his pride as a SOLDIER—that was lost to him through his rebellion against Shinra. Because he receives the gift by battling Zack, who had inherited the will of Angeal who championed honor and pride, Zack himself is the Gift of the Goddess for Genesis for giving this chance. The guide also offers the interpretation that as Genesis is the Prisoner, Angeal is the Wanderer who took flight from Shinra, and Zack is the Hero who saves Genesis. This is reflected in Zack's words at the end of the game, "Hey... Would you say I became a hero?"

On the fifth verse that is revealed at the end of the game, the guide explains this is not the true lost verse, but a verse composed by Genesis himself that reflects his new mindset. With Angeal and Sephiroth gone, the verse symbolizes that Genesis will take up their legacy to protect the Planet himself. The verse's mention of "the sea" refers to the flooded chamber Genesis appears in at the end of Dirge of Cerberus -Final Fantasy VII-.