I got my hands full watching the shop... and Old Dalan had something for me to do, but I can't get away.

Kytes is a young boy with short brown hair and dark blue/green eyes. In Final Fantasy XII he wears a green vest, and a ring pendant. He wears dark trousers and orange cloth wrapped around his waist. He carries a brown leather messenger bag with a blue buckle on the strap.

In Revenant Wings, Kytes has somewhat matured. He wears an orange shirt under a green robe with yellow-tipped frayed hem, brown shorts, a white scarf around his neck, and still has the same bag. He wears brown bands around his shins and ankles with brown and tan shoes.

Being both designed by Ryōma Itō, Kytes's design is similar to Montblanc's, including being both themed with green and orange, wearing brown pants, and, exclusive to Montblanc's artwork in Final Fantasy Tactics A2: Grimoire of the Rift, equipping brown staves with tiny objects on it. They are both Black Mages.

Kytes is cautious in contrast to Filo's headstrong personality. He has a high opinion on Vaan, impressed that he killed many rats, believing that Vaan is already to take on stronger monsters. After Vaan is arrested, Kytes and the other orphans worry over him, and Kytes congratulates Vaan after he returns to Rabanastre, having escaped the Nalbina Dungeons. Kytes fears earthquakes, as revealed in a side mission against Hashmal in Final Fantasy XII: Revenant Wings.

Kytes shows up in Garamsythe Waterway to fetch Vaan for Migelo. Kytes is impressed how Vaan managed to kill so many rats and thinks Vaan may be ready to take on bigger monsters now. Kytes is off to do his chores and later Vaan finds him from the Sandsea, where Kytes introduces Vaan to the notice board, saying Vaan should be strong enough to take on the Rogue Tomato.

Later, Kytes congratulates Vaan after Vaan has escaped the Nalbina Dungeons. He stays in the Lowtown slums when Vaan embarks on his new adventure with the new friends he made from the heist on the palace. When Vaan is looking for medallion pieces, Kytes and Filo have found a woman who has discovered a fragment of the medallion needed to break Chaos's seal. Kytes tells Vaan where to find her.

An orphan living in Rabanastre's Lowtown, Kytes is one of Vaan's closest friends. Hoping to become a sky pirate himself, Kytes practices magick with single-minded determination.

Along with Filo, Kytes joins Vaan on his new adventure when a previously unexplored floating continent called the Lemurés is discovered. Vaan starts his own sky pirating group and Kytes is the first to join him, along with their friends Penelo and Filo.

At night, Vaan wakes up Kytes and Filo and brings them to the streets without Penelo. Suddenly, monsters not native to the desert appear, forcing the trio to defeat them. Filo watches the guards run off because of thieves stowing onboard so this is their chance to steal the ship. They sneak to the airship and see a portal that summons monsters appear. After defeating the monsters, they examine the portal, which is actually a Summoning Gate. Vaan captures the Gate and uses the crystal to summon monsters. With the Espers at their disposal, they test them by fighting the nearby hostile monsters.

When the trio check the bridge, Ba'Gamnan and his siblings ambush them. While Vaan wants to fight them, Kytes and Filo flee, forcing Vaan to flee as well. Ba'Gamnan's siblings corner the trio, forcing them to battle them while using the Espers to help them. After Ba'Gamnan and his goons are defeated, the airship suddenly starts. The trio run to the bridge; Ba'Gamnan awakens and pursues them. However, he falls down the stairs, knocking him out.

Penelo and Tomaj confront them at the bridge, demanding to know where are they going. But the airship begins flying; Kytes and Filo realize that the airship is flying towards the sky continent of Lemures. Vaan assures Penelo that he knows how to drive the airship. With Ba'Gamnan tied up, Vaan names the airship Galbana.

The party lands the Galbana on the sky continent, then they enter The Bosco Pampa. Filo opens a nearby chest, which contains an old book. But Vaan decides to take it anyway. They spot an injured person being attacked by monsters so they rescue him. The injured person introduces himself as Llyud, an aegyl. Afterward, the party rescues Llyud's companion.

The party leaves for Fane of Gucuma Qul where they defeat the sky pirates. After the battle, Kytes and Filo are playing with two alraunes while Llyud tells Vaan and Penelo that they call the god of Lemures the Eternal. Kytes tells Vaan that the treasure he found at the Cache of Glabados is a piece of auracite. After Llyud gives Vaan the Ring of Pacts, they continue in their mission in defeating more sky pirates.

Going deeper to the Fane of Gucuma Qul, Kytes and Filo try to open a locked gate but fail. Filo discovers a switch that unlocks the gate. Reaching the deepest part of the chamber, they encounter Titan whom they battle until Ba'Gamnan interrupts the battle. Tomaj reveals that he is controlling Ba'Gamnan; with the controlled Ba'Gamnan's help, they defeat Titan.

Going again deeper into the Fane of Gucuma Qul, Vaan tells Togi, the treasure hunter that they will take the auracite from them. After the battle, Togi will not say a word so Vaan lets Ba'Gamnan attack him. Scared, Togi reveals that someone called the Judge of Wings gave them the auracite. He reveals that the Judge of Wings destroyed the barrier protecting Lemures to invade Ivalice. Mentioning a giant auracite crystal called auralith, Togi makes a run for it while the party is distracted. Tomaj hides from him because he is not a fighter.

At the airship, Llyud reveals to the party the history of Lemures and the Eternal is named Feolthanos. The party enters The Kisne Rise where they rescue aegyl from the sky pirates. The party decides to let the surviving aegyl rest in the airship.

Buccaneer's Battalion is a group formed by Kytes, Filo, and Deeg, and their "enthusiasm" depends on where the player is in the story and what optional quests are completed. The kids can be found within Lowtown/North Sprawl inside the residence.

Kytes's role in battle is that of a Black Mage. His skills are Black Magick, and he gains the ability to charge up and then cast stronger spells. He has high Magick Power, but his Defense and Speed are low. His Quickening, Nature's Wrath, deals powerful damage of a random element to all enemies in range. It can be obtained by defeating Chaos.

Kytes wields various rods in battle. Depending on his weapon properties, his elemental spells' power can be boosted accordingly. 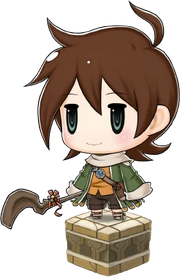 Kytes is mentioned in Dissidia Final Fantasy by Penelo in the Battle Tips menu on Onion Knight's Character Info, where she claims the latter reminds her of Kytes.

Artwork of Kytes and various other Rabanastre orphans, by Akihiko Yoshida.

Kytes with Vaan and Penelo.

Kytes in the middle with Tomaj (left) and Vaan (right).

Vaan brags to Kytes about his escape from the Nalbina Dungeons.

Kytes asks Vaan about his escape from Nalbina.