I know nothing of ideals. As long as I get to finish things, I couldn't care less what happens to this world, or who dies!

Kaze, usually referred to as Black Wind by Makenshi and their enemies, is one of the main characters of Final Fantasy: Unlimited. He is the last of his kind, an Unlimited among the Windarians who have all died with their world.

Kaze is a tall man of slender build and tan skin, and has long dark red hair tied by a metal ring at the level of his neck and then below his waist. He possesses light blue eyes, as well as facial tattoos: three red triangles to the side of his left eye, and horizontal blue mark on his nose. He wears half a pair of sunglasses which conceals his right eye, as well as an earring on his left ear.

He wears simple clothing—dark trousers, a short-sleeved shirt, a long dark brown glove on his left arm, and a knee-long black cloak that covers his lower face—as well as a dark red holster for his regular gun in his right side. His right arm is covered by the golden Magun (or Demon Gun), which when inactive (or "frozen") has a cylindrical shape. He holds the Soil charges used to fire the Magun on his belt.

He's a mystery, a destroyer, a man with a single-minded mission. Those who confront him will be defeated with the power of Soil.

Silent and taciturn, Kaze barely speaks except when there is something he wants and rarely replies to anyone. Partly because he suffers from amnesia, he is driven solely by the thought of confronting his rival Makenshi (or as he calls him, "White Cloud"), as well as the prospect of battling the Earl Tyrant's minions. It is only during battle that he shows emotion: he exudes confidence and determination to put an end to his enemies. Due to his single-mindedness, he seems not to care about Ai, Yu and Lisa, but generally ends up saving them and, while not explicitly stated, Kaze is connected to the twins. He appears whenever they are and can only activate the Magun if they are present.

Outside of battle, Kaze tends to sit to one side and remain motionless until provoked into action by his enemies, and cares little about his surroundings. Seemingly antisocial, he is not without a caring side: he lets Lou Lupus cling to him as much as she wants. Kaze also is highly observant—not only he is able to see through Somosan's deceit, he also deduces Cid's condition or could locate Oscha hidden in the shadows. He has a strange relationship with the Magun; he variously calls it his "heart" and his "life".

Kaze's original homeworld, Windaria, was destroyed by Chaos. It is during its destruction that he first encounters Makenshi, whose world was also destroyed, carrying an unconscious, but otherwise unharmed, Aura, Kaze's younger sister. He also comes across Moogle Kupo, one of the surviving moogles. Disbelieving of Makenshi's claims at first, Aura regains consciousness to vouch for him.

At this point, Chaos appears to the group in "person". It is here that Kaze and Makenshi try to destroy Chaos. Utilizing the lives-turned-Soil of Aura, Moogle Kupo, and himself, Kaze tells Makenshi to fire the Magun for him, summoning the Gun Dragon. Throwing himself into Chaos, Kaze, through the Gun Dragon, tells Makenshi to destroy it while he holds it at bay. Makenshi does so by turning himself into Mist and summoning the "Symphony of the White Cloud" Sword Dragon. Passing through the Pillar of Darkness, they end up fighting on Earth during the Day of Conjunction; however, rather than dying from the battle, Kaze is separated from Chaos, slips into a coma-like slumber, and ends up in Wonderland.

Twelve years later, Kaze awakens when Yu Hayakawa first stumbles across him, tripping on his leg while chasing a chocobo. After this contact, he immediately asks after Makenshi, though he does not recall why. With only this name, and the brief flashes of his memories reminding him that his world was destroyed, but not how, why or by whom, he assumes Makenshi is the one responsible and makes it his sole goal to find and kill him.

However, it quickly becomes apparent that he is somehow tied to the twins when the Magun refuses to fire when not in their presence, and despite the size of Wonderland, he continuously encounters, and protects, them from the Lords of Gaudium, Fungus and Herba. He next encounters Makenshi at the Comodeen's base, where Makenshi attempts to reunite with Kaze, but Kaze attacks him; Makenshi notices all is not well with Kaze, and tells him that it would have been better if he had remained asleep. He defeats Kaze in one attack and leaves.

Despite losing to Makenshi, Kaze survives, and after defeating Fungus once again, boards the Interdimensional Train alongside Ai, Yu and Lisa. They meet Lou Lupus shortly before the Subway is attacked by a piece of Omega; he begins to recall more and more of his past, eventually remembering Aura, and rescues Lou from being consumed by Omega by summoning Ifrit. They next meet Pist Shaz XI, who at the Soil Desert attempts to steal the Magun. Although he is unsuccessful, Pist finds out that Omega has awakened and reports it to the Earl, who orders them to find Omega.

After a few run-ins with the Lords of Gaudium, Kaze confronts Fungus in the remains of his world. The General proves temporarily too strong for him, threatening the twins; Lisa pleads him to save them until Makenshi appears to confirm that Kaze can no longer fire the Magun at will and leaves. Kaze then summons Meteor Master to burn the spores, and unbeknowst to him, Crux (per Oscha's orders) releases a poison that kills all the fungi, including Fungus itself. He rejoins Ai, Yu, Lisa and Comodeen, just in time to enter the Ocean Puzzle inside Cid's submarine Jane.

In the climax, Kaze recalls what occurred when Chaos invaded Windaria and he and Makenshi fought together. Their roles now reverse, Makenshi uses his own soul to hold Chaos in place while Kaze uses his, Lou's, and Moogle's souls to summon the Gun Dragon, asking Lisa to fire the Magun for him. At the end of the series his fate is left ambiguous, but is resolved in the sequel Unlimited After.

Kaze survived the final battle with Earl Tyrant, ending up in the Sea of Japan and separated from the Magun, which is now in the hands of the C2 Organization. Receiving new Soil from the spirits of many moogles that died long ago on Windaria, Kaze goes in search of the Magun, ending up with him facing not only the C2, but Soljashy as well. He also wishes to fight Makenshi, only so they can destroy Chaos.

However, Kaze's determination to destroy Chaos includes killing the twins because of their connection to it. Kaze is unable to do that due to the others' disapproval. The others had not stopped him from killing Dolk, who requested a quick death. Kaze used Dolk's soil to free Lisa before he entered the gateway she unintentionally created to finish the fight with Chaos once and for all.

There are a number of tracks that can be associated with Kaze. One notable track is called "Silent Kaze" (沈黙の風, chinmoku no Kaze?), which plays in his first appearance and has been his theme since. This track was composed by Nobuo Uematsu and is the tenth track in the Final Fantasy: Unlimited - Music Adventure Verse 1.

Other tracks include the theme of him summoning from his Magun. This includes "The Magun has Thawed" (魔銃解凍, Majuu kaitou?) that plays when the Magun is activated, and "Firing the Magun" (魔銃発射, Majuu hassha?) which plays when Kaze loads the Soil bullets to summon. Both are composed by Shirō Hamaguchi and are the twelfth and thirteenth tracks in Verse 1 respectively.

Ai and Kaze shooting a monster

Kaze by a tree

Kaze's appearance in the final product resembles Vincent Valentine of Final Fantasy VII, both sporting one arm covered in a golden object, use firearms, wear a cloak covering the lower face with dark clothing underneath, and both characters wield a three-barreled gun. Kaze's skills also correspond to those of a Summoner and Gunner from the series.

Kaze is voiced by James Hudson Brownlee in the English dub.

He is voiced by Nobutoshi Canna in Japanese. Canna also voiced Nooj from Final Fantasy X-2.

Kaze and Lisa in Episode 13. 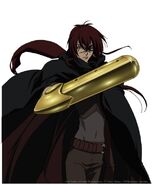