Shisui of the Violet Tides

Kurenai Shisui is a non-player character from Final Fantasy XIV: Stormblood. Kurenai is a resident from Shisui of the Violet Tides and seeks assistance in Sui no Sato.

Kurenai is a raen Au Ra with wine red hair and green eyes. She wears a lady's suikan adorned with flowers and dyed wine red. She has a red flower in her hair and wears red sandals on her feet.

Ever since birth Kurenai has been forbidden from leaving Shisui of the Violet tides and found interest in the outide world through tomes. Kurenai inherits the Ruby Princess name from her mother when she passes and acts as the ruler of Sui-no-Sato. One day a man cloaked in black visited Shisui of the Violet Tides claiming that he had come to grant a blessing of holy protection to the palace. To protect Ruby Princess, the princess swaps places with her childhood friend, Hisui. The ritual proves to be a farce and the man invokes a voidsent that possess Hisui and the palace guards. To prevent this from spreading, Shiosai evacuates and seals the palace but hides the truth behind it, he allows the Ruby Princess to leave Shisui on the condition that she does not disclose her identity and acts as the princess's sister.

Kurenai realizing that she could not solve the situation alone asks the Warrior of Light for help to infiltrate the palace and defeat the voidsent. Once done the guards begin to regain their senses but Hisui remains in deep sleep. With the help of the Warrior of Light, Kurenai goes to the surface to investigate a fairy tale that recounted a situation resembling Hisui's and an elixir capable of waking her up. The tale is revealed as a true story and Kurenai visits Tamamizu in search of the elixir, she meets with Inban and when he has the ingredients in hand, he prepares the elixir to finally awaken Hisui. After Hisui wakes up, they return to Shisui.

After the adventure she experienced with the Warrior of Light, she decided that it was time for her people to embrace the outside world and welcome trade. She enlists the help of Sanana, a worker from Rowena's House of Splendors to help with ties to the outside world. She also requests the aid of the Warrior of Light to help their people with remedies from Gyr Abania, harpoons to help with fishing, and Coerthan garbs to keep her people warm. After selling items of their own to collector's around the world, Shiosai accepts her want for trade and may even allow her to leave the palace more often. 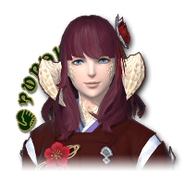 Kurenai and Hisui.
Add a photo to this gallery
Final Fantasy XIV characters
Retrieved from "https://finalfantasy.fandom.com/wiki/Kurenai_Shisui?oldid=3312091"
Community content is available under CC-BY-SA unless otherwise noted.