Kanata Kizuka
The Kunoichi is a wind-elemental Eidolon from Final Fantasy Dimensions II. It can be obtained as a signet for Maina to equip by completing the "Brothers" main quest during Chapter 5-1.

In the original free-to-play versions of the game there were two variations of the summon, one that taught Inception abilities, and another variant that taught Gauntlet abilities. Both versions of the signet could only be obtained through the game's summon draw shop. The Kunoichi was an S+ rank summon and could be equipped by any party member.

The official description of the summon from the free-to-play versions described the summon as a female ninja that guards the legendary sword, the Masamune. The Kunoichi summon is based on the Kunoichi boss from Final Fantasy III, being based on the enemy's artwork by Yoshitaka Amano, although the summon's clothing is colored purple instead of pink.

The Kunoichi's special attack is Shade Shift, which allows all party members to negate a single attack. Summoning the Kunoichi costs 2 bars from the Summon Gauge.

The following are the abilities Maina can learn from Kunoichi: 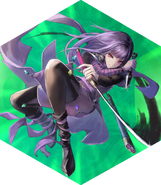 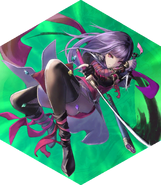 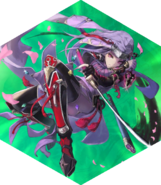 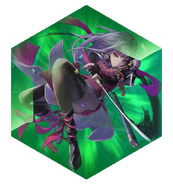 [view · edit · purge]Kunoichi (くノ一?) is a Japanese term for a female ninja. The characters which make up kunoichi are a mix of hiragana (く, ku?), katakana (ノ, no?), and kanji (一, ichi?); thought to be because they resemble the strokes from the kanji for "woman" (女, onna?).