The ninja knows that a blade may make a passing good ladder, key, or splint; yet he also knows that it is best used for killing.

Kunai (くない, Kunai?), also known as Ninja Knife, Imperial, Short and Short Knife, is a recurring weapon in the series. It is often a low-rank dagger or ninja dagger with no special properties, though it can be used by several characters and jobs most of the time.

Kunai (originally translated as Short and Katana in the Easy Type), is a katana only Edge can equip, and is his starting weapon. It can be bought in Cave of Eblan for 4,000 gil, has an Attack of 25, and Accuracy of 40. This weapon is metallic.

The Kunai is the weakest katana, providing 7 Attack and 40% Accuracy. It can be bought for 200 gil.

Small blade favored by ninjas. Can be used with Spellblade.

The Kunai is a low-ranked knife used by Ninja and Freelancers. It can be bought in Karnak and Lix for 600 gil, and has an Attack of 26. It also adds +1 Speed.

Kunai (originally called Imperial) is a low to mid-ranked dagger used by Shadow, and is his starting weapon. It can be stolen from Baalzephon. It has an attack power of 82, and enables the Runic command.

Kunai is also one of the weapons thrown by the Outsider, which deals moderate non-elemental damage to one target.

A Kunai is the most basic katana that a Ninja can wield.

The Ninja Knife is the offhand weapon that Reddas wields as a guest party member. It provides 25 Evade, and is not obtainable by normal means.

Unlike the swords wielded by Reddas in his concept artwork, the Ninja Knife resembles a Khukuri.

A multipurpose sword for ninjas.

The Kunai (also known as Ninja Knife) is the second weakest ninja blade. It can be bought for 5,000 gil, poached from Ghouls or found with the Treasure Hunter ability as a rare treasure at Grogh Heights, and has an Attack of 9 and Defense of 5%.

This ninja sword can be used for many purposes.

The Ninja Knife is the second weakest katana, with Zanmato being the weakest. It teaches Throw to Ninjas and has an Attack of 31. It can be bought for 2,000 gil in the shop after the first shop upgrade, and is also a random reward for completing missions.

Kunai is the weakest katana and can be equipped by Ninja. It teaches Throw to Ninjas for 100 AP. It has an Attack power of 31 and can be bought for 500 gil in the shop after creating it in the Bazaar after using an Earth Stone, Xergis Tin, and Prima Petal.

Kunai is the weakest ninja sword. It provides 55 attack power and is effective against humans.

Kunai is a level 1 parrying that provides the character with an Attack Power of 2 and a Defense of 1.

An enchanted ninjato that increases the wielder's mobility.

A stealthy weapon from the land of Wa, a mysterious island nation that vanished centuries ago. It is believed to be a kind of shuriken that was the preferred weapon of a school of ninjas known as the Koga.

In Bravely Default, Kunai is a dagger that provides 27 P.ATK, 95 Aim, 3 Critical, and +20 EVD. It can be found in Hartschild and Starkfort, or dropped or stolen from Kikyo. 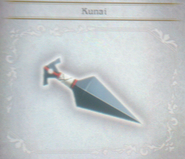 [view · edit · purge]Kunai are a Japanese bladed weapon associated with ninja and likely derived from gardening tools. They are short blades with holes on the end of the handles that provide a multitude of uses, such as a grip or tying them to the body. They were primarily used for melee combat and to dig holes in walls and floors, but can also be used as throwing weapons.