Kuja appears as an obtainable summon. He can be obtained as a summon through the summon drawing shop. An alternate variant, Kuja OR, also appears as a summon. 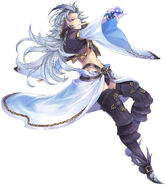 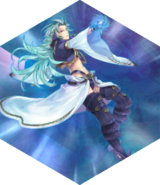 Signet (Rank 6).
Add a photo to this gallery 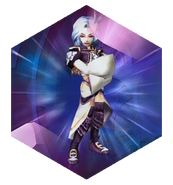 Kuja OR.
Add a photo to this gallery 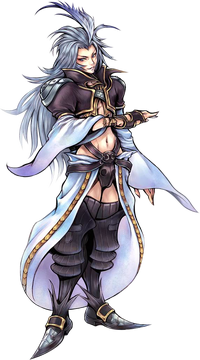 Kuja appears as a warrior of Chaos and stands as the antagonist opposing Zidane.

As the youngest of the warriors serving Chaos, Kuja is looked down on by his peers for his inexperience. Determined to prove himself, Kuja concocts several plans to trap the warriors of Cosmos, particularly focusing on Zidane with the intent to break his spirit with isolation and feelings of powerlessness.

Kuja works alongside Exdeath and Kefka and initially plans to abduct Squall as bait, but when Squall defeats him, he turns his attention to using a fake Crystal to kidnap Zidane directly. Bartz takes the Crystal instead, and Kuja uses him to unwittingly deliver another fake Crystal to Zidane, isolating him from his friends and leaving him to fight Kuja alone.

His alternate outfit is a light blue palette swap based on his artwork by Yoshitaka Amano.

Due the modifications Dissidia storyline, Kuja's story is heavily retconned. Zidane and Kuja have recovered their memories and are on friendly terms. Kuja plots to betray Chaos by leading Zidane, Squall, and Bartz to his throne so the three can defeat him and end the war. He also weakens Kefka's control of Terra due to sympathizing with her plight.

Kefka learns of the plan and appears along with the Emperor and Ultimecia when Kuja meets with Zidane, acting as though Kuja has lured them into a trap. Caught in his lie, Kuja plays along to save face and attacks Zidane, Squall, and Bartz, allowing them to escape. Kuja is later defeated by Lightning after being goaded to challenge her by Kefka.

Between cycles, Kefka interferes with Kuja's memories, twisting them so Kuja will be loyal to Chaos and act as Zidane's enemy. Infuriated when he learns of his fake memories, Kuja vows to defeat Zidane to demonstrate that memories, true or false, are not needed to prove his worth. 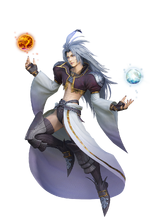 Kuja is a playable character and a representative of Final Fantasy IX. He is classed as a Assassin-type character. His EX Skill is Discarnate Chorus (Soul Resonance) that buffs nearby allies, while also making Kuja's EX skill gauge fill faster.

A Warrior of Spiritus, Kuja retains his memories from his homeworld and the previous cycles, and thus defects to aid Zidane and Terra to gather summons. Kuja is reluctant to act outright heroic, yet enjoys teasing Zidane and develops an amicable relationship with Terra.

Kuja appears as a playable character and can obtained during the time-limited event A Scene Set by the Gods. Throughout the game, Kuja actively investigates the dimensional distortions that occurs in the world and the Moogle Mog's "true identity". He encounters Zidane and his group many times, often them giving cryptic warnings, and sometimes appears to aid other warriors of Materia when they are in trouble.

The hand behind the destruction sweeping the Mist Continent. Kuja plotted the destruction of the world, manipulating and ultimately killing Queen Brahne, betraying his creator Garland, and turning at last on Zidane...

Kuja's Portrait.
Add a photo to this gallery

Kuja appears as a playable character.

Kuja's sprite.
Add a photo to this gallery

Kuja appears as a Legend. 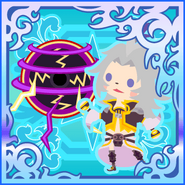 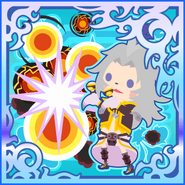 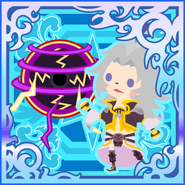 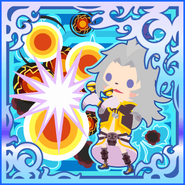 Burst Energy (UUR+).
Add a photo to this gallery 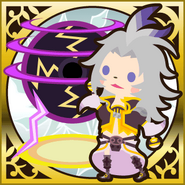 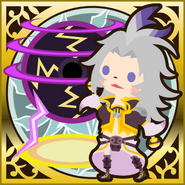 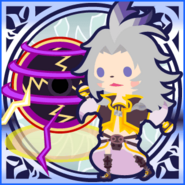 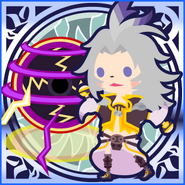 Burst Energy (UR+).
Add a photo to this gallery

Kuja is an enemy in dedicated Final Fantasy IX stages and a playable character who could be initially recruited during the Challenge Event Angel of Death as the First Time Reward for completing the event's Pandemonium stage on Classic difficulty.

Kuja appears as a vision obtainable through summoning. His job is Reaper. His trust mastery reward is Flare. He possesses the special abilities MP +20%, MAG +20% and Absorb MP. He possesses the magics Gravity, Barthundara, Dispel, Thundaga, Shell and Graviga. His limit bursts are Flare Star, Reaper's Dirge and Neutron Ring.

Kuja appears as an opponent in PlayOnline's Tetra Master.

Kuja.
Add a photo to this gallery

Kuja appears as a card in Lord of Vermilion Re:2 as a new addition to the set of cards from the original Lord of Vermilion 2. His artwork was drawn by Shukou Murase, character designer for Final Fantasy IX. His in-game appearance is identical to his appearance in Dissidia Final Fantasy, and his special ability is his trademark ability, Flare Star.

Kuja appeared as part of the Final Fantasy collaboration. He was first introduced in the collaboration event that happened in the North American version from May 16, 2016 to May 29, 2016. When fought in the Void Beyond, he uses the skills My time is almost up..., Reflect, Holy, Flare, Curaga, Flare Star and I'm not gonna die alone... After defeating him, he drops Zidane's Mage Masher.

He was obtainable as a 5-star ranked unit named "Trance Kuja", with an attacker type and fire and dark elements.

As a 5-star ranked unit, Kuja appears in his Trance form and emits a light aura while commanding several balls of fire. His active skill is Flare Star and his leader skill is I'll bring this to an end!. 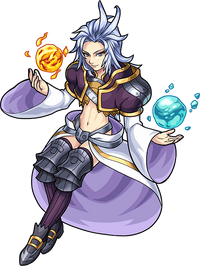 Kuja appears as part of the 2018 Final Fantasy collaboration.

This section about a character is empty or needs to be expanded. You can help the Final Fantasy Wiki by expanding it.
Final Fantasy IX characters
Final Fantasy Brave Exvius characters
Retrieved from "https://finalfantasy.fandom.com/wiki/Kuja/Other_appearances?oldid=3475381"
Community content is available under CC-BY-SA unless otherwise noted.