His first alternate costume is "Cloaked Anchorite", a revamped version of Kuja's "Treno Nobleman" attire in Dissidia 012 Final Fantasy, now based entirely on its original concept art by Hideo Minaba. Kuja wears an elaborate black coat with lavish patterns, white and blue pants, knee-length black boots, white gloves, and a pointed wizard hat. He has white back-length hair with curls at the top and sides of his face. The first alternate coloration of this costume colors his hat and coat purple, his pants white and gray, and his gloves black. The second alternate coloration colors his hat and coat white, his pants black and purple, and his gloves black.

Angel of Death A

Angel of Death B.

Cloaked Anchorite C.
Add a photo to this gallery

Kuja retains his memories from his homeworld and the previous cycles, and thus defects to aid Zidane and Terra to gather summons. He tries to remain distant and is reluctant to act outright heroic, but enjoys teasing Zidane and develops an amicable relationship with Terra.

Kuja equips magical Cores as his main weapon. The cores have not appeared in the Final Fantasy series prior, and are original weapons for Kuja in the Dissidia series. The first three Cores, when split, resemble the Fire, Ice, and Lightning trifecta of elemental spells, while the remaining Turbid Cores represent light and darkness. The cores emit a fiery aura. 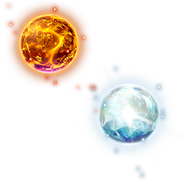 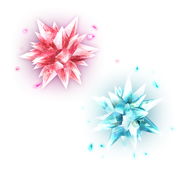 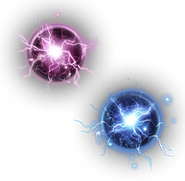 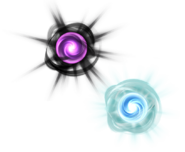 Kuja's Turbid Core.
Add a photo to this gallery

Kuja is summoned as a warrior of Spiritus and gathers with the other antagonists at the god's tower. When Spiritus communicates with Materia, Kuja silently watches as Spiritus declares his intentions to rule World B.

At Midgar, when Zidane and Terra are ambushed by the Emperor and Sephiroth, Kuja fends the villains off and heals the heroes. The trio enters Trance, but the battle is cut short when planesgorgers begin devouring the dimension.

Kuja, Terra, and Zidane enter a portal, where Kuja attempts to brush the others off. However, a moogle insists that he stays with Terra and Zidane. Remembering how Kuja freed her from Kefka's spell in the twelfth cycle, Terra persuades Kuja to join them, expressing her desire to have a proper conversation with him. When Terra thanks Kuja for freeing her from Kefka, Kuja pretends to not recall the event.

As they enter Alexandria, they are attacked by Alexander, despite Terra's assurances they aren't here to harm him. Kuja states it was a mistake for him to appear before the summon, but Zidane reminds Kuja it is not the same Alexander he destroyed on Gaia, much to Terra's confusion. After they prove their worth to Alexander, Kuja dismisses Zidane's gratitude for his help, claiming to have only helped them to obtain the summon. When the planesgorgers start to destroy the area, Kuja begins to depart and advises Zidane and Terra to do the same, acknowledging Terra's desire to see him again in the future.

Once Materia and Spiritus come to a truce, Kuja joins the rest of the champions to defeat Shinryu, the source of planesgorgers that threatens to eradicate the world. Before their staged battle to lure Shinryu out, Zidane suggests they meet up again "once things calm down," and Kuja nods in agreement and flashes a smile at him. During the battle, Kuja attacks Tidus and Vaan, but is interrupted by Cecil and starts battling him. Once the battle energy summons Shinryu, Kuja participates in a joint attack against the dragon, but is repelled as Shinryu reveals his true form in a potent burst of power. Once the warriors regain their composure, they work together to defeat Shinryu.

The moogles give Kuja a crystal to host his memories for Spiritus to use in the new cycles of wars. With a crystal doppelgänger of himself to serve on Spiritus's behalf, Kuja is sent home alongside Zidane.

Type: Assassin - Kuja can glide around while performing many of his abilities.
EX Skill: Discarnate Chorus (Soul Resonance) - Grant buffs to any nearby allies, while also making Kuja's EX skill gauge fill faster. The skill is enhanced each time it is used, and up to three buffs can be applied at once.

Kuja in the Arcade version.

Kuja in his arcade trailer.

Kuja alongside the other warriors of Spiritus. 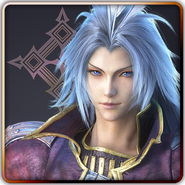 Promotional CGI artwork of Kuja alongside the other main Final Fantasy villains.
Add a photo to this gallery