"Kuja's Theme" (クジャのテーマ, Kuja no Tēma?) is a musical theme from Final Fantasy IX. It was composed by Nobuo Uematsu. It is the leitmotif of the game's main antagonist, Kuja. "The Darkness of Eternity" has become a notable arrangement of it, being the boss theme for Kuja's ultimate form.

Being the leitmotif of Kuja, the main antagonist, "Kuja's Theme" and its arrangements are heard several times during the game. The original theme can be first heard at Burmecia, when he makes his first appearance in the story. Not much later, the arrangement "Kuja Exits Burmecia" (ブルメシアから去るクジャ, Burumeshia kara Saru Kuja?) plays during the ending FMV of disc 1, as Kuja leaves the ruins of Burmecia riding his Silver Dragon.

"Kuja's Theme" can also be heard while Kuja escapes from Brahne's attack on the disc 2 finale; and on disc 3, when he returns to his base of operations after attacking Alexandria; as the overworld theme during the quest for the Gulug Stone at Oeilvert; after the defeat of Meltigemini at Mount Gulug; and finally, when Kuja enters Trance at the end of disc 3. "Kuja's Theme" is the fifteenth track of the first disc of the original soundtrack, while "Kuja Exits Burmecia" is the tenth track of the original soundtrack PLUS album.

"Wicked Melody" (背徳の旋律, Haitoku no Senritsu?), an extended arrangement of "Kuja's Theme" which includes a pipe organ introduction and adds a distinguishable heavy percussion to the main melody, begins to play when Kuja appears at the Iifa Tree, riding on his Silver Dragon. "Wicked Melody" plays again at the Desert Palace, when Kuja asks Zidane to get the Gulug Stone at Oeilvert for him in trade of his friends' lives. "Wicked Melody" is the nineteenth track of the second disc of the game's original soundtrack.

"Devil's Ambition" (欲望の足音, Yokubō no Ashioto?) is a short and slower arrangement of "Kuja's Theme" that plays during several appearances of Kuja, starting with his appearance at Treno. It is heard again during the events at the Iifa Tree, when Kuja lands his Silver Dragon and confronts the protagonists. Later, in disc 3, "Devil's Ambition" returns when Kuja appears in Alexandria during Garnet's ascension to the throne. It is heard again when Zidane and his comrades fall into Kuja's trap at the Desert Palace. It later plays at the end of disc 3, before the battle with Kuja. "Devil's Ambition" is the eight track of the third disc of the original soundtrack.

"Kuja's Theme" is included in the themes "Bahamut is Summoned" (召喚！バハムート, Shōkan! Bahamūto?) which plays in the FMV where Brahne summons Bahamut to destroy Kuja; and "Destruction of Brahne's Fleet" (全滅ブラネ艦隊, Zenmetsu Burane Kantai?), where Kuja captures Bahamut with the Invincible, and destroys Queen Brahne's fleet. "Neo-Kuja's Downfall" (ネオクジャ崩壊, Neo Kuja Hōkai?) plays during the FMV at the end of disc 3, where Trance Kuja destroys Terra. "Bahamut is Summoned", "Destruction of Brahne's Fleet" and "Neo-Kuja's Downfall" are, respectively, the sixteenth, seventeenth and twenty-sixth tracks of the original soundtrack PLUS album.

After the events at Oeilvert, the remaining captured party members must escape Kuja's Desert Palace. The background theme for this location is another arrangement of his leitmotif called "Kuja's Theme (Millennium Version)" (クジャのテーマ Millennium Version, Kuja no Tēma Millennium Version?). It was included in the original soundtrack PLUS as its thirty-third track.

During the final battle with Trance Kuja, at the Crystal World, a final arrangement of "Kuja's Theme" named "The Darkness of Eternity" (破滅への使者, Hametsu e no shisha?, lit. Envoy to Destruction) plays. This arrangement is longer than any other version of "Kuja's Theme", and features "Wicked Melody"'s opening, which leads to a fast-paced build up and then the theme breaks out in a guitar riff. This arrangement mixes the melody of the theme while elements of funk and rock can be heard in the background. At 2:13, the music changes, fading into a slower section. "The Darkness of Eternity" is the most prominent arrangement of "Kuja's Theme", and it is the fifteenth track of the fourth disc of the original soundtrack.

An unused version of Kuja's theme called "Kuja V" (Kuja5, Kuja5?) was included on the original soundtrack PLUS album as its forty-first track. It is very similar to the original, but features a distinct development.

"The Darkness of Eternity" appears in the music player on the Memories of FFIX (Disc 1) - OST album purchased from Coernix Station - Cauthess for 100 gil. 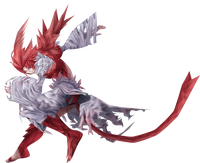 "The Darkness of Eternity"

The original version of "The Darkness of Eternity" can be purchased for 500 PP in the PP Catalog after defeating Chaos.

After being acquired, "The Darkness of Eternity" can be automatically selected for battles including Zidane or Kuja, or taking place at the Crystal World.

The original version of "The Darkness of Eternity" is a bonus track. Its cost has been reduced to 150 PP from the PP Catalog, and is now available from the start. After being acquired, it has the same appearances as in the aforementioned game, but can also be automatically selected for battles taking place at the new M.S. Prima Vista arena.

A new rock arrangement is a default theme, while the original PlayStation version can be bought for 3,600 gil from the shop.

For the Nintendo 3DS version, "The Darkness of Eternity" was available as downloadable content.

For the iOS version, "The Darkness of Eternity" is available to download as part of the Final Fantasy IX Other Battle Music category, as well as "Battle 2", and "Something to Protect".

"The Darkness of Eternity" is a Battle Music Sequence for Final Fantasy IX.

"The Darkness of Eternity" is a playable Battle Music Sequence that can be purchased from the song store for 5 sound medals. It was also the worldwide victory reward for the "Regen vs. Haste" Lux Crystal Battle that took place between August 3, 2017 and August 16, 2017.

"The Darkness of Eternity" was included in a medley including "Silver Dragon" and "The Final Battle" in an 8-bit arrangement by mochilon. It is the ninth track of this album.

"Wicked Melody" was included on this Final Fantasy IX best-of soundtrack release. It is the album's eighteenth track.