Krysta (コキュートス, Kokyūtosu?, lit. Cocytus) is a recurring ability in the series.

Krysta is an enemy ability used by Minerva, which inflicts massive non-elemental magic damage to Zack. It requires extremely precise timing to dodge through to avoid taking any damage at all.

Krysta is an ability used via Rikku's Mix command, which inflicts three hits of major Ice-elemental damage to all enemies, as well as Poison, Darkness, Silence, Sleep, and Full Break for three rounds.

Krysta is a Mix ability that inflicts three hits of 300 Ice-elemental damage and Sleep to random enemies. 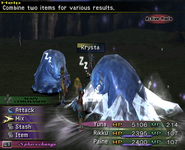