I await the next time to hone my blade.

Krjn, Caroline in German and Italian, is a viera member of Clan Centurio in Ivalice title games of Final Fantasy.

One of the clan's founders, Krjn is an experienced fighter and assists the party in the Carrot Hunt. Her younger sister, Ktjn, is also met by the party.

Krjn uses a bow. Like other viera, she is weak against Earth-elemental attacks. She has low defense, but can parry and resist damage at low HP.

Krjn again will participate against Carrot in Stage 70. She and several viera are fought in Stage 71 where the following items can be stolen from her: Artemis Arrows (common), Sagittarius (uncommon) and Dhanusha (rare).

In the Japanese version, she is one of the first members of Clan Nutsy.

Krjn is an Archer as part of Clan Centurio's team for the Champion's Cup. 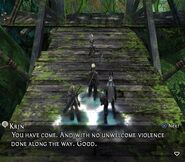