It seems luck is on your side today, Warriors of the Light. I am Kraken, tasked by Lord Xande to steal the light from the crystal of water... And you...you are all about to die!

Kraken is a boss in Final Fantasy III, fought in the Cave of Tides. Kraken is sent by Xande to procure the powers of the Water Crystal. It attempts to attack Luneth, but Aria stands in its way, sacrificing herself to save him. Kraken attacks the Warriors of Light, but is defeated.

Kraken has access to Fire2, Ice2, and Bolt2, which deal very high damage to the party (maximum above 700). The party should use strong physical attacks or high-level magic.

It is recommended to have a Scholar use Zeus's Wrath or Heavenly Wrath items while a Red or Black Mage constantly uses Thundara. If the player picked up the Blizzaga spell earlier in the cave, they should use it as well. One party member should constantly cast Cura/Cure. 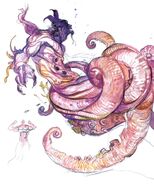 Yoshitaka Amano artwork of the Kraken.