Kolshushu is a vast expanse of arid wasteland is situated in the center of the Mindartian Continent in Final Fantasy XI. In the ancient language of the Tarutaru, the word "Kolshushu" means "the land of decision". Many centuries ago, when the Tarutaru made their epic journey from the continent of Quon, countless lives were lost in this region due to a lack of water and the perilous terrain. It was then that the tribes held a great meeting to decide whether they should continue their journey or head back to their homeland.[1]

There are 8 zones in Kolshushu. 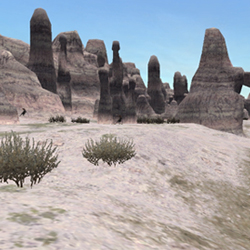 This relatively small peninsula is located on the east side of the Pamtam Straits. In comparison to the dry weather that plagues much of the Kolshushu Region, Buburimu is often visited by occasional squalls that provide enough water for certain grasses to grow. Also, on the eastern tip of the peninsula, a strangely shaped rock formation can be found. At night, the ore deposits within the formation give off a fluorescent light that acts as a marker for passing ships. The Tarutaru call this place the Kibubu Lighthouse. The region's outpost is located in this zone.

While this zone has never been as popular as Valkurm Dunes for parties, the introduction of Fields of Valor has made it a popular destination for solo players and small groups. A Cavernous Maw near the outpost connects the Buburimu Peninsula to the Attowha Chasm in the alternate reality of Abyssea. 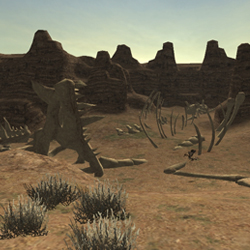 The twisting canyons of the Tahrongi were carved out of the surrounding mountains thousands of years ago when powerful rivers ran through the region. While this spectacle of nature awes all who pass through, the danger that lurks within its walls should not be underestimated.

This zone is is the site of the Crag of Mea. Chocobo rental services are located near the associated Telepoint. A Cavernous Maw by the south exit connects the Tahrongi Canyon to its Abyssean counterpart.

This natural labyrinth was formed long ago, when water from the rivers above seeped through the crust and ate away at the rocks below. The fossils of great ancient beasts can often be found deep within this natural wonder.

These tunnels lead to the remote Attowha Chasm.

This dark, maze-like labyrinth is littered with the bones of both fallen adventurers and prey alike. The labyrinth is filled with a huge variety of different types of animals, including large numbers of sea monks, toramas, cockatrices, scorpions, and goblins.

This large fishing barge takes a variety of routes through Bikibi Bay. In addition to taking passengers back and forth between Bibiki Bay and Purgonorgo Isle, there are two sightseeing tours, one to Dhalmel Rock and one to the Maliyakaleya Reef, both of which depart/arrive from Bibiki Bay.

The barge notably one of the few places where players may encounter the elusive uragnites.

This inlet in the southeast of Mindartia looks out on the Gugru Blue. Sheltered by a multitude of tiny islands, its tranquil waters were once used by Tarutaru fisher folk to farm vast quantities of shellfish and seaweed. After the Crystal War, the cultivation of Bibiki Bay was abandoned as the Mithra brought their expertise in fishing to the mainland. The Fishermen's Guild, seeing the bay's potential, recently paid for the right to begin fishing in the area. The guild has made their small fishing vessels, or manaclippers, as they are called, available for use by adventurers.

Bibiki Bay, though abutted against original zones, requires players to have the Chains of Promathia expansion to enter. There is no other in-game prerequisite to enter Bibiki Bay.

In order to bring in ordinary sightseers, the Fishermen's Guild gained permission to land on the beautiful beaches of Purgonorgo Isle. This island in the middle of the Bibiki Bay is accessible only via the Manaclipper. Many of the bounties of aquaculture, including the magically enlarged shellfish known as uragnite, remained untouched. The island has no native inhabitants aside from the mandragora that grow here. Aside from the dock, a wayward warmachine, and some washed up and no longer sea-worthy row boats, there is absolutely no sign of civilization. Truly, this is one of the most beautiful, untouched, tropical paradises of Vana'diel.

Despite its scenic value, its one of the most difficult zones to reach, as only the Manaclipper runs here. However, a certain swimsuit awarded during the Sunbreeze Festival has an enchantment that allows limited teleportation to this island.