Masaski Aizawa
King Kolka, full name Kolka Tawantyn, is a 38-year-old Selkie from Final Fantasy Crystal Chronicles: Ring of Fates who helps the main characters in the quest. He has a daughter, Princess Tilika.

Not much is known about the King's early life. He is old friends with Latov, having trained with him under the same instructor. The two even married two Clavat sisters, with his wife giving birth to Tilika prior to her death.

After Yuri and Chelinka destroy the Angry Flower they enter the castle to meet King Kolka, to find that there is another "Alhanalem" advising the King. Indignant, the real Alhanalem claims that the female Yuke was an impostor, because the Yuke species's names are unique. Kolka seems extremely weak and sickened and in the middle of the conversation he stands up and leaves, agreeing with Alhanalem that the only way to prove that he was truly the real one was to search out an item that Alhanalem had received from the King.

When the party returns with Meeth Crym, the sick king is pulled between the female Alhanalem and the real Al. When the constraint becomes too much, he retires once again to his bed chambers. Later in the night, Yuri and Chelinka and the others come to talk to the king. He recognizes them, but as they converse Cu Chaspel arrives, stabbing Kolka and framing the party. 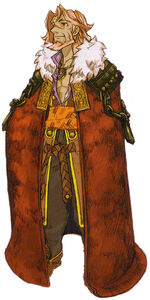 When the team arrives in the Great Crystal's room, they find the whole city mysteriously asleep. When arriving in the King's room they find Kolka under the spell of the female Yuke. Using the power that Princess Tilika had lent her, Chelinka weakens the false Al and she reveals herself as the Lich the one that attacked them in the Shadowland. The team defeats her and the Lich looses control of King Kolka. Then Kolka tells them about he origin of their world and the evil power of the moon. Then a stronger more assured King Kolka tells Yuri and Chelinka that he plans to eradicate the Lunite Galdes and purify the temple of all moon power.

After a rest in the castle, the team and King Kolka invade the temple and defeat Cu Chaspel and his clones. But when Galdes uses the power of the moon, he deletes King Kolka from existence in his own twisted version of reality. When Galdes is stuck in his own time loop, reality reasserts itself and everything returns to normal, including King Kolka. Although no one else definitively recognizes Yuri and Chelinka, he reveals that whatever the reality he exists in, his crystal infused bloodline will always be the same. He offers Yuri and Chelinka a chance to live with him in the castle, but they decline it.

In the newer reality, created by Yuri and Chelinka, King Kolka is a much happier man, but his kingdom is declining by the rise of monsters, keeping the citizens away from the capital. Through out destroying the monsters and defeating the boss dungeons, the city eventually gains more and more citizens. When many missions are completed in the Multiplayer mode, King Kolka reveals that he will abdicate from the throne and give his kingdom to his daughter Princess Tilika, who, because of the reality altering powers of Yuri and Chelinka, is alive.

He is voiced by Masaski Aizawa in the Japanese version.