Kokkol lived in the smithy with his employees and remade weapons until his drive to forge them gave out. After Cecil brings Kokkol Adamantite, the smithy goes back into business and items are sold there afterward. Items can be bought from the dwarf behind the counter.

In Rydia's Tale in Final Fantasy IV: The After Years, the player can trade Kokkol Ore found throughout the tale with other weapons for stronger weapons, some of which cannot be acquired elsewhere in Rydia's or anyone else's tale. There are twelve Kokkol Ore scattered throughout the various areas that can be visited in the Tale, so the player must choose what to trade it for wisely.

In the mobile versions of Final Fantasy IV, the player can embark on a quest to find eidolons scattered around the world. The fifth eidolon is found in the entrance of Kokkol's Forge, and had a sword made.

A single treasure chest is in a hidden passage on the right side of the wall of the first floor. This only appears in the SNES versions, and does not appear in later versions.

The background music that plays at Kokkol's Forge is the Final Fantasy IV "Town Theme". 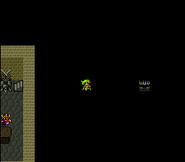 Map of outside Kokkol's Forge.

Kokkol's Smithy on the world map in Final Fantasy IV: The After Years (Wii).