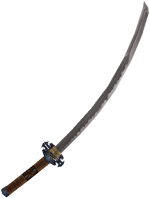 A spirit sword from a faraway world that is imbued with a dark magic contained within the emblem etched on the blade. The sword imparts and amplifies the wielder's dark powers.

The Kogarasu is a low-ranked katana for the Eblan Four as well as Edge. It provides 20 Attack and 40% Accuracy, and can be found in the Cave of Eblan and the Tower of Babil (as Edge).

The Kogarasumaru is the Samurai Mythic Weapon and as such is one of the strongest 2-handed Katana. Its base form is a level 75 great katana with damage 81 and delay 450, but it can be upgraded all the way to Item Level 119 with Afterglow. At any level, it sometimes attacks more than once, improves Third Eye, and bestows the ability to use the weapon skill Tachi: Rana; when Tachi: Rana, is used, the user gains Aftermath status, boosting their accuracy and attack stats.

The Kogarasumaru is a low-ranked katana that provides 58 Attack and 13% combo rate. All katana have 2.39s charge, and 1.2s action time, making them average what it comes to attacking speed. It can be bought for 5,600 gil at Mt Bur-Omisace, Nalbina Fortress, and Rabanastre, dropped by Wu (very rare) and Garuda, or from the Hunt Club sidequest. It requires 35 LP and the Katana 1 license in order to equip.

In the Zodiac versions, it provides 40 Attack, 19 Evade, 31 CT, 20% combo rate, and requires the Katana 2 license for 50 LP. It can be bought in Rabanastre, Bhujerba, Dalmasca Westersand, Nam-Yensa Sandsea, Tomb of Raithwall, and Balfonheim Port for 2,500 gil, found as a treasure in Ogir-Yensa Sandsea (East Junction, Platform 1 - South Tanks), or dropped by Wu (1% chance).

Raven is a 1 parrying armor that provides +2 Attack, +19 Defense, and BRV Boost on Block +2%. It can only be obtained in the Labyrinth.

Kogarasumaru is a Katana obtained from the Star Ocean event, Vanquish Jie Revorse!. It provides 72 ATK and is Dark-elemental. 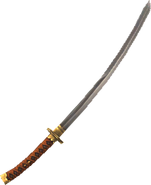 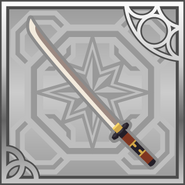 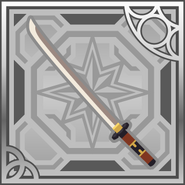 [view · edit · purge]The Kogarasu Maru, which roughly translates as "little crow", is a unique Japanese tachi sword rumored to have been created by the legendary Japanese smith Amakuni during the 8th century CE.