A powerful ninja sword that was once used by a secret society.

Koga Blade is a mid-ranked Dark-elemental ninja sword that provides 67 Attack, 20 Evade, 24 CT, and 18% Combo Rate. It requires the Ninja Swords 2 license to equip, and can be found in Sochen Cave Palace (Mirror of the Soul), dropped from Ash Wyrm (3% chance), or as a reward for completing the Great Cockatrice Escape sidequest.

In the Zodiac versions, it now provides 87 Attack, 15 Evade, 22 CT, 22% Combo Rate, is Earth-elemental, and requires the Ninja Swords 3 license for 120 LP. It can be found in Lhusu Mines (Site 3) or Cerobi Steppe (Feddik River), dropped from Ash Wyrm (3% chance), or by completing the Great cockatrice escape sidequest.

Koga Blade is a high-ranked ninja sword that provides 15 Attack and 5% Weapon Defense. It can be found in Midlight's Deep or caught from level 96+ Ninjas. 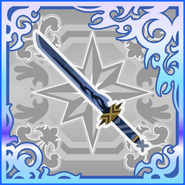 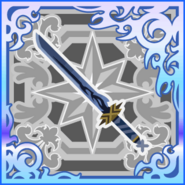 [view · edit · purge]Kōga-ryū and Iga-ryū were historical schools of ninjutsu that became one of the two most well-known ninja schools in Japan. In the games where the Koga Blade exists, it has a counterpart called the Iga-ryū, referring to these two schools of ninjutsu.