Knights of Round (Final Fantasy VII)

Materia Cave on Round Island

Knights of Round, referred to as Knights of the Round in its receipt message, is the most powerful Summon Materia in Final Fantasy VII. It summons a group of thirteen knights, based on the Knights of the Round Table from the Arthurian legend. The knights perform Ultimate End, which deals thirteen hits of immense damage to all opponents that ignores their Magic def.

Obtaining the Knights of Round Materia gains the player the Knights of the Round achievement in the PC version re-release and the Roundtable Destruction trophy in the PlayStation 4 release.

The knights' summon attack is called Ultimate End and strikes the enemy party multiple times. The knights each attack with different weapons and spells:

Although not stated in the game, the final knight is King Arthur (アーサー王, Āsā-ō?), who has a grander entrance and attack.[1] This particular knight was released as a figure as part of the first Final Fantasy Creatures set with the given name of Arthur. The next-to-last two knights should be Gawain and Lancelot, since it is believed that Gawain wielded an axe and Lancelot a sword, the Arondight. The twelve knights, other than Arthur, use four models between them, each with three color variants.

When asked whether the Knights of the Round in Final Fantasy VII are the Cetra that sealed away Jenova two thousand years ago, Director Yoshinori Kitase answered: "Everyone's thinking too deeply, reading between the lines too much. That makes it difficult because if you think about it that way, we might have to make it that way. That's definitely not true."[2]

Knights of the Round has the longest summon animation in Final Fantasy VII. The sequence can be skipped with the Vincent Mug glitch.

The Knights of Round Materia is obtained from Round Island, a hidden island in the northeast of the world map. This can only be accessed with a Gold Chocobo. 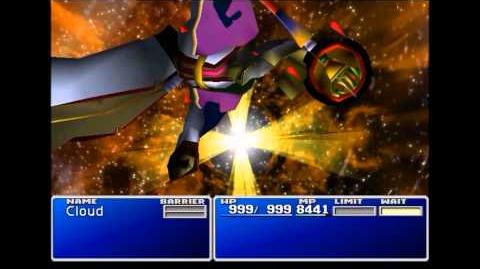 The Knights of Round cost 250 MP to summon, and perform Ultimate End. This attack summons the thirteen medieval knights to attack all enemies in succession, dealing heavy non-elemental damage, which cannot be reflected and ignores their magic defense. Each attack is equal to 5x the base magic damage.

Knights of Round is the most powerful summon in the game, and can deal up to 129,987 damage to a single target. One use of Knights of Round is enough to kill most enemies except the Emerald and Ruby Weapons, the final boss, and Chocobos (which cannot be killed). Due to its high MP cost, and long summon animation, it is not practical to use most of the time.

Knights of Round can be paired with a few Support Materia for unique effects, though this is generally not required. For instance, if paired with Steal as well, it will allow for for 13 attempts at stealing from the enemy. If paired with Magic Counter, the character can perform the attack without using up a turn. MP Turbo can be used to deal even more damage than usual, though this is often unnecessary.

Knights of the Round is the only Summon Materia that will not work with Quadra Magic, regardless of whether it is linked to the specific Knights of Round Materia or to Master Summon Materia.

Equipping the Knights of Round Materia comes with major stat changes. It brings -10% HP, but +20% MP, +8 Magic, and +8 Magic def. The HP change is a drawback, but it provides no other penalties, and its boosts to MP, Magic, and Magic def are excellent for spellcasters. It is normally best given to spellcasters with an existing high Magic stat to further benefit and improve their spellcasting abilities, including with Knights of Round itself. These include Cloud, Red XIII, Yuffie, Cait Sith, and Vincent.

Arthur with the Excalibur.

Concept art of Arthur and the Excalibur.

[view · edit · purge]The Knights of the Round Table are the main characters in the Arthurian legends of Britain. King Arthur was the leader of the knights, wielding the sword Excalibur. When called, the knights assembled at the Round Table. According to legend, Arthur was betrayed by Mordred, in some accounts held to be his own son. Arthur assembled his knights to a battle to the last man with the traitor, in which Mordred was slain and King Arthur was fatally wounded. Sir Bedivere, the only survivor, took the King to Avalon to rest until he was needed to rule Britain again.