Alexandria Castle
The Knights of Pluto is a humorously inept group of nine knights led by Adelbert Steiner in Final Fantasy IX stationed at Alexandria Castle. Effectively a police force of Alexandria, they are charged with the protection of Queen Brahne and Princess Garnet, but they get discharged when Steiner leaves with Zidane's group, being replaced by General Beatrix and her soldiers under martial law.

During the performance of I Want to Be Your Canary the player has the option to find the Knights of Pluto in the locations listed above. Locating them all and reporting to Breireicht in the left tower will earn an Elixir.

When Bahamut attacks Alexandria on Disc 3, Garnet gives orders to the Knights of Pluto. Their past ineptitude has vanished, replaced by the passion they have to defend their home. The knights' personalities will be a key factor in the completion of the tasks they are assigned.

An easy way to accomplish this is to first choose Gather Information and choose Blutzen and Kohel then mash confirm.

If the player assigns the jobs correctly, they will receive Angel Earrings. Otherwise, the reward is an Ether, Hi-Potion, or Elixir.

Haagen and Weimar are fought alongside Steiner on the M.S. Prima Vista.

One of Zidane's alternate outfits is the Knight of Pluto armor he uses as a disguise in Final Fantasy IX. He wears a single piece chestplate with pale gray and green shorts and brown boots. He bears a sword sheath strapped over his torso, and a small round shield on his left arm. His EX Mode form in this outfit is purple.

Zidane's Knight of Pluto armor appears as his alternate outfit for his 2nd form.

Zidane's Knight of Pluto armor appears as his alternate costume.

"Knights of Pluto" is a quiz answer on an Academia quiz terminal in Final Fantasy XIII-2.

The market square in Alexandria has a monument called "The Three Heroic Knights of Pluto". Inspecting it says the following: This statue was built to commemorate the three knights who fought bravely in the 15th Lindblum War, in 1601.

Blutzen is seen undressed with darker skin and a blond mohawk; however, when he in his knight uniform, his skin is paler, and his hair, although mostly unseen, is a brown bowl cut.

Toys of depicting the Knights of Pluto are seen in Lindblum when Vivi stumbles upon kids playing with them. Though some other mini-figurines can be found as collectibles, the knights are only seen in this one Active Time Event.

In an early draft for the Final Fantasy IX opening unearthed from an old development memo Hironobu Sakaguchi has since shared online, it appears the group of soldiers Steiner was envisioned to lead was an unnamed guard of paladins who would have aided Steiner in storming the Theater Ship to save Garnet. When the Theater Ship would have taken flight, all of the paladins bar Steiner would have been blown off the deck.[1]

Concept art of a Knight of Pluto. 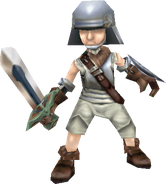 Knight of Pluto in battle.

Knights of Pluto on the Red Rose.

[view · edit · purge]Pluto was the ruler of the underworld in classical mythology. The earlier name for the god was Hades, which became more common as the name of the underworld itself. In ancient Greek religion and mythology, Pluto represents a more positive concept of the god who presides over the afterlife.

There are nine members of the Knights of Pluto. Pluto (at the time of the game's release) was considered the ninth planet from the Sun until demoted to a dwarf planet. Final Fantasy IX contains many allusions to the number nine as per its placement in the main series.

The Knights of Pluto could also be a play on The Raven, a poem by Edgar Allan Poe. The titular raven arrives on the narrator's doorstep from "Night's Plutonian shore".

Though the English localization fails to accurately reflect this, the original Japanese names are based on German towns:

The German version of the game is slightly more accurate at retaining the knights' original names: