Knight Lance (ナイトランサー, Naitoransā?) is a recurring weapon in the Final Fantasy series.

Knight Lance is a weapon for Kimahri, obtained if the dominant ability on any spear are any three Strength +% abilities. 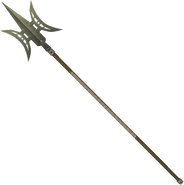 [view · edit · purge]The lance is a pole weapon or spear designed to be used by a mounted warrior. During the periods of Classical and Medieval warfare it evolved into being the leading weapon in cavalry charges, and was unsuited for throwing or for repeated thrusting, unlike similar weapons of the spear/javelin/pike family typically used by infantry. Lances were often equipped with a vamplate – a small circular plate to prevent the hand sliding up the shaft upon impact. Though best known as a military and sporting weapon carried by European knights, the use of lances was widespread throughout Asia, the Middle East and North Africa wherever suitable mounts were available.