The Knight is a job in Final Fantasy V, obtained after the Wind Crystal shatters. It is the first heavy armor job and has the highest Strength stat of all heavy armor jobs until the Advance port, where Gladiator is slightly stronger.

The Knight is the third highest in Stamina, being beaten out by the Berserker and Monk, and is one of three jobs capable of wielding the powerful Knight swords, the others being the Freelancer and the Gladiator.

Mastering the Knight on all characters in the mobile and Steam versions earns the achievement "Master of Attack & Defense".

The party is clad in armor. The men wear red, the women wear blue, and Krile wears pink.

The Knight's main ability, Guard, safeguards the user against physical attacks until their next turn. Their innate support ability, Cover, makes the Knight take all physical damage for HP Critical allies. Both can be combined, as while using Guard, the Knight takes no damage even when covering for allies.

Cover will never activate if the character that would be covered is afflicted with Petrify, Zombie, Instant Death, Sleep, Paralyze, Confuse, Berserk or Stop, or is off-screen.

Guard will not stop statuses that would be inflicted from physical attacks, and will still take damage from Sap. A useful combination in tangent with Guard is Counter, as counterattacks activate during Guard.

The Knight is one of the few jobs capable of equipping the Mythril Gloves, Genji Gloves, Gauntlets, and Titan's Gloves accessories. It is also one of two specialized jobs (not counting the Freelancer) capable of using the powerful knight swords.

Any job equipped with the Two-Handed support ability can wield one weapon with both hands, and will gain their character's base Freelancer Strength +13 if their default stat is lower.

Equip Swords gives characters the Knight's base Strength unless they otherwise already have a higher value.

Upon mastery, Freelancers and Mimes gain the Knight's base Strength, Agility and Stamina unless they already have a higher base from another mastered job.

Guard is the job's innate command ability, able to be equipped on the character's other jobs after leveling Knight up to Level 3. The Knight's innate support abilities are Cover and the abilities to equip shields, light and heavy armor, and swords and knight swords.

Knights deal damage with physical attacks while protecting party members who are low on HP.

Since Bartz has a new moveset based on the jobs in Final Fantasy V, he has a move based on the Knight job. Knight is an HP attack that is a counter-block: once the enemy hits the shield, Bartz will counter-attack with two swipes with his Brave Blade, dealing HP damage.

Similar to Bartz's moveset in Dissidia Final Fantasy NT, the main cast of V borrows abilities from several different jobs as an homage to the Freelancer/Mime jobs.

Bartz's Base Ability is the Level 3 Knight ability Doublehand (Two-Handed). Through the special mechanic Final Fantasy V characters possess in Opera Omnia, Bartz can "Master" this ability after enough uses changing it into Doublehand+.

Galuf's Base Ability is the Level 1 Knight ability Cover. Galuf can also "Master" this attack, transforming it into Cover+. 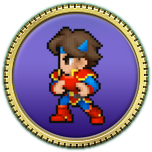