Relm: I couldn't miss the chance to practice my drawing!
This article is in need of a few pictures. Perhaps you can help by uploading a picture of Tiz as a Knight. 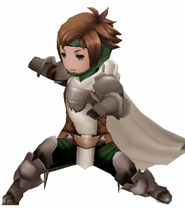 The Knight (ナイト, Naito?) is a job in Bravely Second: End Layer. It is obtained after defeating Argent Heinkel.

The Knight has high defensive potential and is somewhat combat-focused. Its specialized weapon are swords, and it favors shields over helms or other armor. The Knight's abilities focus on manipulating physical attack and defense, both in itself or in its allies, to improve combat ability, although it can also defend its allies from danger due to its impeccable defense. Its skillset is Chivalry.

The Knight's specialty is Protect Ally. Its job command is Chivalry.

Magnolia as a Knight.

Edea as a Knight.
Add a photo to this gallery

This gallery is incomplete and requires Tiz as a Knight added. You can help the Final Fantasy Wiki by uploading images.