Long have I awaited this, the day that you would come. A tragedy unfolds now which pains me more than you can know. To end it, I will gift to you my light. Though in so doing, I condemn myself to sorrow greater still.

Kluya, also known as KluYa, is a non-player character in the game Final Fantasy IV. While he is never seen in the initial releases, the 3D version greatly expands his backstory in relation to the Blue Planet and thus reveals him for the first time.

Kluya is a mage of some power, as when he came to the Blue Planet he brought with him the secrets of Lunarian Magic, which he taught to the villagers of Mist. He seems to possess some degree of Holy powers, as he was able to, after death, transform Cecil into a Paladin, and later Kain into a Holy Dragoon. 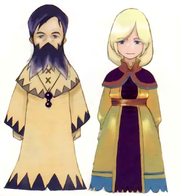 Kluya is a Lunarian from the Red Moon, and is the younger brother of Fusoya. He became interested in the Earth, and eventually settled there. He fell in love with a human named Cecilia and fathered two children: Theodor, who was born out of Darkness, and Cecil Harvey, who was born out of Light. He brought with him to Earth the Lunar Whale, which he sealed near Mysidia, and taught mankind technology and magic, including the ability to build airships and the Devil's Road.

One night, Kluya was outside troubled by something and stared at the moon, only to see his son Theodor outside at his side. Theodor noticed that his father loved looking at the moons and asked Kluya why. Kluya simply replied, "I'll tell you when you're older." He told Theodor to go back to bed and then leaned his head down in grief. The next morning, Kluya's friends and family find him dying outside his home.

A villager told Theodor and Cecilia that he was attacked and mortally wounded by a rival faction of villagers who disagreed with his teachings, and intended to use magic to wage war. Theodor attempted to cast Cure, but was unable to do so. Cecilia later died in labor giving birth to Cecil. Theodor, who was being controlled by Zemus, became Golbez, took his brother and abandoned him outside of Baron.

Kluya was alluded to for the first time in Mount Ordeals, although Cecil does not know this yet (Palom and Porom do, however). A mysterious light that appears when Cecil undergoes the trials to become a Paladin calls him "my son". When Cecil arrives on the Moon, it becomes apparent he is related to Golbez, as well as them both being related to Fusoya.

Some time after the party defeats Zemus and Zeromus, Kain Highwind trains on Mt. Ordeals and hears Kluya's voice calling to him. Kain enters the mirrored chamber Cecil became a Paladin in, where Kluya tells him he will experience intense pain as Cecil did. Kain's reflection steps from the mirror and attacks him. Kain loses, and the mirrored chamber is shattered as Dark Kain escapes to the outside world.

In Final Fantasy IV: The After Years, when Golbez and Fusoya pray for the Lunar Whale to come to the Red Moon, and Kluya prays with them. The Lunar Whale awakens and flies to them. Seeking answers and preparing for a crisis, the Elder of Mysidia sends Porom to Mt. Ordeals to find Kain and recruit him to defend Mysidia should anything happen. Porom and an escort of mages enter the mirrored chamber to see its damage, and upon leaving they meet Dark Kain, posing as the real Kain. Later in the game, Kain once again confronts his dark side and this time defeats him, accepting his darkness and absorbing him. Kluya recognizes the spirit of justice in Kain and transforms him into a Holy Dragoon in recognition of his trials.

Kluya's fate is unknown—when Porom enters the mirrored chamber, Kluya tells her, somewhat paradoxically, "I... am about to fade... But my spirit...will never be extinguished."