A weapon wielded by the samurai of Ivalice. This exquisitely crafted katana has a unique pattern etched onto its blade, and boasts of a splendid cutting edge. Although it could prove to be an invaluable asset on the field, it is quite difficult to obtain, and only those who have shown resilience in battle have been known to wield it.

This exquisitely crafted katana has a beautifully patterned blade and an incredible cutting edge.

Kiyomori is a mid-ranked katana that provides 12 Attack and 15% Weapon Defense. It can be bought for 10,000 gil at the Walled City of Yardrow from Chapter 3 onwards.

Kiyomori is a Katana obtained from the Final Fantasy Tactics event, The Auracite Chosen. It provides 79 ATK and +10% physical evasion. 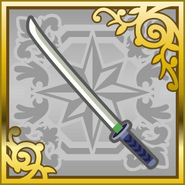 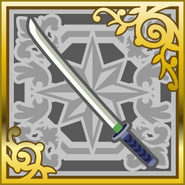 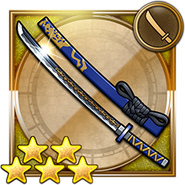 [view · edit · purge]Taira no Kiyomori was a military leader of the late Heian period of Japan. He established the first samurai-dominated administrative government.