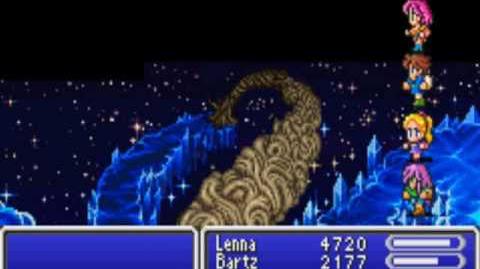 The Kiss of Blessing bug is a bug in Final Fantasy V.

Using the Chemist's Mix command, the Kiss of Blessing can be made by mixing a Maiden's Kiss with a Holy Water, bestowing the Haste, Image, and Berserk statuses to the target. However, due to the coding, the Berserk effect overrides everything, even boss immunity.

Using this mix on a boss can cause them to not perform any script used in the battle. Two particularly notable effects are during battles against Exdeath; in the one-on-one battle versus Galuf, using Kiss of Blessing on Exdeath will make the battle unable to end, as Exdeath is actually defeated by a script prompt. Using it on the Exdeath battle in the Interdimensional Rift makes him unable to transform into Neo Exdeath, allowing the player to complete the game without defeating the final boss.

This bug was fixed for the Finest Fantasy for Advance version. However, by mixing a Blitzshot and a Dark Matter to create a Chaos Cannon with the Cannoneer's Combine move, the attack will also skip the Neo Exdeath battle if it is the final blow of Exdeath's first form. An easy way of doing so without having to calculate his remaining HP or having many Dark Matters is to have every character have the Mimic ability and have one character have Combine. A drawback is that the party cannot heal. A way around this is to have everyone come into the battle with equipment that induces Haste, as Exdeath has a remarkably low Agility stat.