The roots from the great skystone jut from this gently sloping hill. The skystone's Mist tempers the climate, and in spring, the hillside is a riot of color as its rich grasses give way to a sea of flowers.

The Kisne Rise is a location on Tormelados, Isle of the Megalith, which is an island from Lemurés in Final Fantasy XII: Revenant Wings.

The Galbana drops anchor at the Isle of the Megalith to stop the Judge of Wings from reaching the auralith, only to find a sky pirate attack already underway.

Upon making landfall of Tormelados, Isle of the Megalith, Vaan and the party encounter a group of sky pirates attacking a group of aegyl. The party must defend the four aegyl leaders and escort them to the starting point. If any the the aegyl fall to the sky pirates, the game is over. 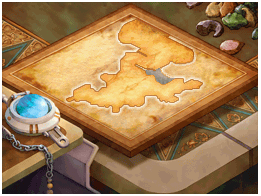 Sky pirates have set up a camp on the plains of Tormelados and are forcing the aegyl to gather treasure for them. Their exploitation must end.

This is a Soul Crystal battle against a group of ill-mannered sky pirates. Fire Espers will be advantageous in the Esper Troupe.