The King of Baron is a character from Final Fantasy IV. 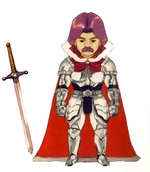 The King of Baron once found an infant under a tree outside Baron. As the infant reminded him of Cecilia, he named him Cecil, and raised Cecil to be a Dark Knight. He wanted Kain to be raised likewise, but he wanted to follow in his father's footsteps to become a Dragoon. The King promoted Cecil the captain of the Red Wings due to his fealty to the Crown. One day, Cagnazzo, the Archfiend of Water, secretly killed the king and replaced him as an impostor. While impersonating the King, Cagnazzo orders Cecil to travel to Mysidia to retrieve the Crystal of Water, and then later to deliver a package to Mist, which turns out to be a ring of bombs to destroy the town.

Once Cagnazzo is defeated, Cecil meets the true king, who reveals himself to be the Dark Knight, Odin. If Rydia has gone to the Feymarch, he will test her by battling her. If Rydia and the party win, Odin will answer her summons.

The King of Baron is the Eidolon Odin whom Cecil summons to assist him in battle against Ceodore, Rosa, Kain, Edward and Cid, but Odin comes to his senses and acknowledges the party, and turns on Cecil.