King Leo is a boss from Final Fantasy IX. He is a character in I Want to Be Your Canary, played by Baku, who is fought during a performance onboard the Prima Vista while it is docked in Alexandria. Alongside him are Benero and Zenero.

The player has the option of using SFX abilities during this battle, but these are just to dazzle the audience and do no damage.

Can't escape. Characters do not pose on victory. No rewards given.

Nothing to steal
Nothing
None 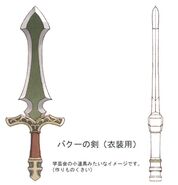 [view · edit · purge]Leo is Latin for "lion". It is a shortened form of the male given name "Leonardo".

In the Japanese version King Leo is called King Lear. King Lear is the main character of the eponymous play by William Shakespeare, which the play I Want to Be Your Canary seems to be based on.