King Leo is a young Clavat and the shortest Clavat in his kingdom. He has short blond hair and green eyes. He wears a tight black shirt under a red shoulder wrap with gold accents and white fur lining and tassels with gold cloth and a blue gem in the center. He wears green puffy shorts with brown straps and a thin gold belt with blue and green beads with a oval buckle with an "M" in the center. He wears white tights and black and red ankle boots with white fur lining and gold plating on the toes. He wears white wristlets on each wrist held on by a black strap and a red hat with white accents and a gold crown on the top. He wears a large gold apple-shaped winged hair ornament with a light blue gem on the left side. 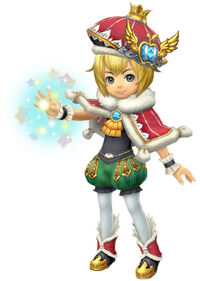 King Leo's "Holiday" outfit consists of a black sailor-style tank top with a white collar wrap with green line designs. He wears puffy green striped shorts with gold accents and a brown belt with a gold frog buckle and a small satchel attached on the left side. He has green ankle sneakers with gold accents and yellow-green striped ankle socks. He has white wristlets around each wrist held on by a black strap and a small gold apple-shaped hair ornament with a light blue gem on the left side.

His "King's New Cloak" outfit consists of tight white shirt with black lining and ties in the front. He has a white shoulder wrap with gold accents and black fur trim and tassels with red cloth and a green gem in the center. He wears black and white striped puffy shorts and black tights with black and white ankle boots with gold plating on the toes. He has white wristlets around each wrist held on by a black strap. He wears a black and white striped hat with a gold crown on the top and a large gold apple-shaped winged hair ornament with a red skull-shaped gem on the left side. He also has a black eye-patch over his left eye.

His "Fresh King" outfit consists of a white sailor-style tank top with a green collar wrap with white line designs and red ascot. He wears blue puffy shorts with white stripes on the sides and green ankle sneakers with white socks. He has green wristlets on each wrist and a red headband with a small gold apple-shaped hair ornament with a light blue gem on the left side.

While King Leo never talks, his personality is revealed by those around him. Citizens of Padarak reveal that his personality differs from his father and that Leo was more like his mother. Before the fall of their former homeland, Leo was never outgoing like his father and would spend most of his time indoors. As King Leo rules over Padarak, he does not try to do everything alone and accepts help from the citizens, while his father would do things alone. In the end, he becomes a stronger leader than his father.

King Leo is the child of King Epitav. Not much is known about is mother, except that she fell ill and died before the fall of King Leo's old homeland. Citizens of Padarak mention that King Leo reminds them of his mother; Epitav also mentions that Leo takes most of his traits from his mother. Leo was born during a celebration known as the Crystal Festival. While his father was very outgoing and enjoyed spending time among the Citizens of Padarak, Leo would stay indoors studying. Leo's mother often worried about the relationship between him and his father, as they never really saw eye to eye.

Chime helped in raising Leo, becoming a sister figure and mentor for him. After Leo's mother passed away, King Epitav locked himself away in his studies. King Epitav left, along with Hugh Yurg, on a Crystal Caravan journey to collect Myrrh for their kingdom's crystal. King Epitav never returned and the kingdom fell to the miasma. Leo and Chime wandered around and were later reunited with Hugh Yurg. Leo would hold a grudge against his father, believing he has abandoned him and the people of their former homeland. After the miasma cleared, Leo got word from a moogle on the last location his father was seen.

King Leo, along with Chime and Hugh Yurg, would arrive to the frontier land established by his father, which King Leo names Padarak. As Leo exams the Crystal found within the empty Kingdom, it speaks to him and grants him the power of Architek. With his new ability, Leo builds the first new home of the new Kingdom. A surprised Clavat woman would appear from the house, revealing that she and her son were from Leo's former homeland.

Leo then begins to build more homes, bringing back more people from his former homeland with the house. Unable to build anymore, the crystal reveals to him that crystals known as Elementites need to be collected in order to create more buildings. The boy from the first house Leo built, ask Leo to allow him to go out and collect Elementites from nearby dungeons. As time goes on, Leo recruits more Adventures to go out and collect Elementites.

Burdens of a King

Rumors start to spread about a Dark Lord who destroyed the last kingdom that was established there. One night the people are assembled around the Crystal pondering on the possibility that the tragedy would befall once again to the realm. Suspicion begins to break against Pavlov, but they are quickly halted by the king and his court. In that moment the Dark Lord himself appears before them, under the guise of King Epitav who encourages the young king to keep constructing the realm. Chime says not to listen, that the king father wasn't like that, afterward the Dark Lord disappears leaving Leo with confused thoughts.

Next morning King Leo is preoccupied about the possibility of his father having been the dreaded Dark Lord, however Hugh Yurg shows up and tells him that the adventurers got together and decided that they will defeat the Dark Lord so everyone can be safe. Yurg notes that, whatever may be the case, the only way to stand against him is to build up the city anyway.

One night, the wandering moogle Stiltzkin shows up. He happens to be rather close to Epitav, so Leo invite him inside to see if he knows anything about his. As it happens, he ran into Epitav soon after the miasma cleared, and told him a story about architek.

The Dark Lord shows up, and Chime yells at him to take off the disguise. The Dark Lord complies, shedding the form of Epitav and revealing his true self. He asks the king why he wishes to stop him, as his goals are the realm's prosperity as well. When asked why, then, he destroyed the kingdom Epitav had built, he replies that Epitav was foolish and refused to accept him so he imprisoned him.

Showdown with the Dark Lord

Defeat the Dark Lord and return peace to our beloved Padarak. And one more thing. This may be a selfish request on my part, but... When the fighting is done, please rescue my father, unjustly imprisoned by the Dark Lord all this time.

The next day Leo is in the lookout pondering on the events of the last night when an apparition of the real King Epitav assures him that they will be reunited eventually. His court joins him shortly afterward, determined that King Epitav must surely still be alive, and in the temple where the Dark Lord heart rests. The king is reminded again that he is needed in town, and can't go rescue his father himself, but should rely on the adventurers he has commissioned. In the following days the townsfolk and adventurers remark to him that they're pleased to know that Leo's enemy is not his father.

Once the entrance to the Shrine of Awakening has been found, the king begins the subjugation of the Dark Lord, attempting to rescue his father, who is the Darklord's prisoner. Once the Dark Lord has been defeated everyone goes to the gates to welcome the heroes, but the king feels a strange presence coming from the Crystal. The Dark Lord appears and tries to take the king to the world of the dead with him, but after everyone attempts to protect the king, he realizes that Leo has achieved something greater than he ever could: Winning the heart of his people. The king finishes off the fading Dark Lord and, with his final words, recognizes Leo as the only one who has been worthy of the title of Archlord.

The next day the townsfolk prepare the coronation of a new king, as Lord Epitav abdicated the throne in favor of his son, and King Leo becomes the sole regent of Padarak.

Years later, after the Dark Lord was defeated, Padarak has blossomed into a prosperous realm under the reign of King Leo. But when Darklord Mira arrives in the kingdom, Leo and his army of heroes take arms to defeat her and thwart her plans for world conquest.

However, when the battle is lost to Mira, she shocks the king by revealing the end of her campaign. She and King Leo then agree to work together to create a world where humans and monsters can live in peace.

Architek is the ability granted to King Leo by the Crystal within Padarak. It allows him to create new buildings in Padarak with its magic. It creates buildings from King Leo's memories of his old homeland, and at first he is only able to build houses. Other new buildings are created after dungeon bosses are defeated. Some are built with the help of the Moogle Brothers.

He also can enter in a state known as Morale Boost in which whoever talks to him will receive a boost either in happiness or stats.

As an enemy in Final Fantasy Crystal Chronicles: My Life as a Darklord he can inflict the Bio status on all monsters, a quality shared with his counterpart Little Pirate. His weapon of choice in this battle is a Racket resembling a Butterfly Head or Queen's Heel, a rarity to see on a Clavat.

Main article: King Leo (My Life as a Darklord)

King Leo appear as the final boss in Final Fantasy Crystal Chronicles: My Life as a Darklord in the stage of Padarak. The battle was apparently staged by Mira's father, the former Darklord, to test his daughter's resolve.

Crown for the royal ruler of a certain realm. For Clavats only.

Clothes for the royal ruler of a certain realm. For Clavats only.

The monster Little Pirate appears as one of the monsters that can be summoned by Mira when purchased as an extra download content. He takes on the appearance of King Leo in his King's New Cloak outfit.

King Leo makes a cameo, appearing in numerous locations such as the Shuttle Central Platform and cherry Checkpoint. According to a letter from a Mail Moogle, is being searched for by Chancellor Chime. Also one of the emblems for Layle jacket is the Little King, which is a silhouette of Leo holding an apple next to his crown.

[view · edit · purge]Leo is Latin for "lion". It is a shorten form of the male given name "Leonardo". Lions are often associated with regalia.