As long as there is light left in these eyes the crystal is safe.

King Giott, or Jiott, is a non-player character in Final Fantasy IV. He is the king of the dwarves who live in the Underworld, reigning from the Dwarven Castle. He has a daughter named Luca. Giott also appears in Final Fantasy IV: The After Years.

Giott is a dwarf with a long white beard. He wears a red or purple suit of armor depending in sprite art and his helmet has two horns. He wears a long cape. Like with most dwarves, his facial features are obscured and only his eyes show from under the helmet.

Giott is an optimistic leader who leads his kingdom through three wars. Despite failing each time, Giott is still on friendly terms with the party, and never blames Cecil for the loss of the war. Though he believes in peace and wants it to last, he tends to go on long ramblings about the past wars he partook in, exasperating his listeners.

I am the king! I do whatever I want! Now, go take apart some tanks!

Giott announces the Crystal is still safe, but Yang senses something amiss in the crystal room. Luca's dolls, the Calcabrina, have become possessed by Golbez. Giott lets the party into the back to defeat them, but afterward Golbez appears, and after a battle he steals the Crystal. Giott divulges the last Crystal is in the Sealed Cave, which Golbez cannot open, and suggests it is a good time to reclaim the other Crystals in the Tower of Babil. However, the plan fails.

Giott decides it is time to open the Sealed Cave and orders Luca to give Cecil her necklace, which is the key to the Sealed Cave. Cecil's party fails, and Golbez steals the last Crystal. Giott tells Cecil about the Lunar Whale that was alluded to in the Mysidian Legend. The dwarves do not know that Mysidia exists, but Cecil does.

During the Battle of the Giant of Babil Giott commands an army of tanks to defend the world against the Babil. Afterward he goes to the Tower of Wishes in Mysidia to pray for Cecil. After Zeromus has been felled and peace restored to the world, Giott orders his tanks scrapped as he believes there will be no more wars, and later attends Cecil and Rosa's wedding along with Luca.

Luca mentions that her father, King Giott, sent the dwarves' tanks at the base of the Tower of Babil when the tower glowed for a few moments.

Seventeen years after Zeromus was felled, the Red Wings attack the dwarves' castle again, accompanied by a powerful Maenad. Despite being able to hold their own against the bombardment, the dwarven guards are pushed back when the Maenad summons monsters that overwhelm the castle's defenses. Giott warns Rydia that the Maenad leading the forces stole the Dark Crystal, and had the same power to control Eidolons that Rydia has. Luca and Rydia head to retrieve the Dark Crystal from the Sealed Cave, Giott entrusting Luca's safety to Rydia.

During Zangetsu's time undercover at the castle, he witnesses Giott giving a speech to his men about the casualties and hardships in the aftermath of the crystal war, his men expressing exasperation and implying this to occur often.

In Porom's tale, Cid stops by the castle with Rydia, Porom and Palom on their way to the Passage of the Eidolons. Luca, excited to see Palom, accompanies them, shushing her father's mentions that she talks of Palom frequently.

After the Creator has been dealt with, the true nature of the Crystals revealed to him by Luca, Giott confesses it is over his head, but declares dwarves are not meant to ponder the mysteries of the universe as they are a simple folk, and he sees no reason to continue guarding the Crystal as they have always done regardless of its origins.

The background music in the Dwarven Castle is "King Giott's Castle". An arranged version of the theme, called "Giotto, the Great King", is included on the Final Fantasy IV: Celtic Moon album.

In the Dawn of Souls and subsequent releases of the original Final Fantasy, Giott is one of the automatic names the player can choose for the Warrior job. 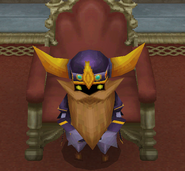