Guess what? I saw a giant bomb deep in the Salikawood, kupo! That's not far from Nabreus Deadlands...it probably came from there!

King Bomb is an optional boss in Final Fantasy XII.

At the time the party is to go to Archades, they must go through Salikawood. A fork in the road leads to the dead areas of Nabradia and a craftsmoogle warns the area ahead is infested with Bombs. King Bomb is a somewhat unique boss as the player can escape anytime.

It is also fought in the Zodiac versions' Trial Mode at Stage 21 along with three regular Bombs, although it can spawn more. In the Trial Mode it has equipment for stealing: Onion Bombs (common), Flametongue (uncommon) and Oil Bombs (rare).

Being a fiery armament of singular destructive power among the bombs created in ancient times.
It was long thought that the bombs disappeared, never taking to the wilds, yet drawn by the massive Mist cloud left in the wake of the tragedy at Nabudis, they came to live here as odd guests in the forest.

The player can escape.

The player can escape.

During the battle, it is possible to leave the Grand Bower, but only in the direction of the Gate Crystal. To gain access in the other direction toward the Necrohol of Nabudis, the boss must be defeated.

The boss will call to its aid up to three other Bombs, which it will replace if they are destroyed. Even if the player avoids attacking his minions, they will be sacrificed using Chain Reaction if the King is near. Immobilizing the Bombs and the King in different areas will prevent this dangerous attack.

Having Regen active on all party members is useful due to the King's "Reflect Damage" augment that constantly inflicts damage to its attackers in addition to the King Bomb's actual attacks.

Below 40% HP the King gains "Reduce Damage" augment, and any damage against it is cut to 1/3; using 1000 Needles is the only means of attack that doesn't suffer this penalty, making it useful for finishing off the boss if all three active party members know it. "Reduce Damage" does not trigger if the King is diseased (it also becomes unable to heal with Renew).

After King Bomb's health has been significantly depleted, it will retreat and cast Renew. It will usually also retreat when its minions are depleted, and since it flees faster than a party can chase, it will gain time to summon more using Cry for Help unless immobilized.

After casting Renew on itself twice, King Bomb may cast Chain Magick on itself and spam Fira one after the other with no casting time. While staying alive during this point is challenging, the King will soon run out of MP and be forced to revert to using physical attacks. At this point it will also be unable to Renew itself. King Bomb can cast Renew even when silenced.

King Bomb is vulnerable to Immobilize and Silence, and if afflicted with both and attempting to attack a party member outside of its physical attack range, it will rest idle until the target moves into range. This opens it up to a beating from other party members until its HP is fully depleted.

King Bomb is weak against Water (doing double damage) and takes half damage from all other elemental attacks, except Fire, which heals it point-for-point. Its magick resist is higher than its defense, making physical attacks good to use, and instead using magick to heal the party and haste them to attack faster.

The player should be ready to heal party members afflicted with the Oil status, as King Bomb's attacks are Fire-elemental. King Bomb himself doesn't put Oil on the party, rather, his Bomb minions do. Gillie Boots immunize wearers immune to Oil. There is no magick that removes Oil, so players must stock up on either Handkerchiefs or use a Lore-enhanced Remedy.

Summoning Belias to absorb the King's fire attacks is a good tactic, as Espers always draw enemies' attacks, but Belias must not be allowed to use its final attack, as it will heal King Bomb. In the original version this can be avoided by quickly finishing off the King Bomb, or dismissing Belias prior to the last ten seconds of his summon. In the Zodiac versions, the player can control summons directly.

The player can buy the Six-fluted Pole in Mosphoran Highwaste that has affinity with Water, making Water-elemental attacks deal more damage. In the Zodiac versions, poles are exclusive to Monks who don't learn magick on their own, but can use Aquara Motes. The player might also have acquired the Aqua Shot for a gun. For fire-protection, the party can wear Flame Shields, Adamant equipment, or in the Zodiac versions, the Sash.

The last part of the King's health should be removed quickly, such as with Quickenings. Using 1,000 Needles with everyone also works if it does more damage than other attacks due to being unaffected by the King Bomb's "Reduce Damage" augment.

King Bomb is greatly affected by the Nihopalaoa+Remedy combo. With all the Remedy Lores, one Remedy will inflict Disease, Slow, Immobilize, Oil, Silence, and Sap, turning this somewhat challenging boss into a pushover. In the Zodiac versions Nihopalaoa is no longer available at the clan shop, and must be crafted at the bazaar. However, the area before the King Bomb (the area with the gate crystal) sometimes has a treasure with Meteorite B when looted with a Diamond Armlet, which inflicts Disease on the target, and can be used against the boss. The player can repeatedly try the chest that spawns 75% of the time in the north of the map at the center bend of the Y-intersection. Diseased units can't be healed, and also stops King Bomb's HP-based triggers.

King Bomb is an optional boss during the side mission, "Mission 76: Restoring Honor". 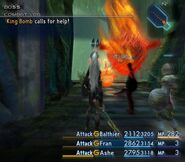 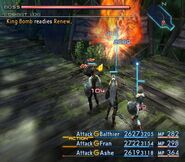