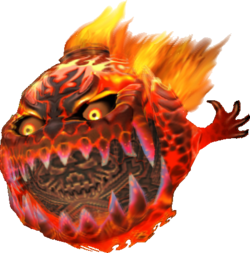 King Bomb (ボムキング, Bomu Kingu?, lit. Bomb King), or Bomb King, is a recurring enemy in the series. It is often the strongest of the Bomb family, sometimes even being a boss later in the game, and possesses high-level abilities. However, it forgoes the usage of the traditional Self-Destruct ability all other Bomb-type enemies use.

King Bomb is an enemy fought exclusively in the Game Boy Advance and PSP versions in the Lunar Ruins. It is the strongest of the Bomb family, having access to the abilities Firaga and Flame and possessing high HP.

Bomb King is an enemy fought in the Depths, and retain their same attacks and patterns as from the previous game.

Bomb King is an optional boss fought at the Monster Arena after capturing at least five of each Bomb-type fiend. It is the most powerful of the Bomb-types in the game, gaining more power as it enlarges every three attacks dealt to it. At its biggest size, it will gain access to the powerful Ultima spell.

The Bomb King is a low-level (16–18) Bomb Notorious Monster fought in the Outer Horutoto Ruins that may drop the Bomb Ring when defeated. It is otherwise notable mostly for the fact that it shares spawn points with the Shadow NMs Doppelganger Dio and Doppelganger Gog; only one of these three NMs may exist at a time.

King Bomb is an optional boss fought at Salikawood at Grand Bower and during stage 21 of Trial Mode in the Zodiac versions. It is a unique boss in that it is one of the few bosses that the player can escape from at any time. King Bomb will always have Bombs as allies during the fight and will replace them if they should fall. It has access to the abilities Fira, Renew, Cry for Help, Chain Reaction, and Chain Magick.

King Bomb is fought as an enemy during the side mission at Feol Warren "Mission 76: Restoring Honor", having access to the abilities Firebreath and Firaja.

The Bomb King is the ruler of the bomb family of voidsent. While it has not been encountered in game, it has been mentioned in archival lore materials as being pivotal in the creation of the Bomb Baron, boss of the Northern Thanalan FATE "The Red Baron." In that legend, it is stated that the Bomb Baron was once a mortal who had made a name for himself by culling thousands of bombs from Eorzea, until he was finally felled by one of the creatures. In spite, the Bomb King took the man's soul and ashes from his body and reforged him into the Bomb Baron, cursing him to eternal torment until he had killed as many adventurers as he had bombs.

A separate entity called the Bombard King was encountered in the 2011-2013 renditions of the Firefall/Moonfire Faire, leading a subset of bombs known as bombards in terrorizing the festivals.

Bomb King appears as an enemy in Battle Music Sequences. 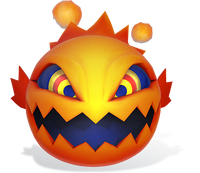 King Bomb are a type of Mirage from the Bomb group. They can be transfigured from a Bomb with a King Bomb Memento.

A King Bomb serves as a boss in Valley Seven.

The King Bomb from World of Final Fantasy appears on Triple Triad cards in the version available via the Final Fantasy Portal App.