Cid Pollendina: Oh, shut up and help me remodel the King Behemoth (The Crystal Bearers) page!
Please expand this article into a full one. The following tasks need to be completed: 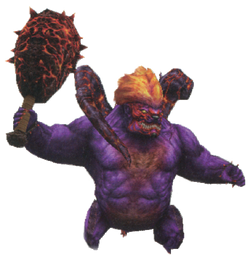 The King Behemoth is encountered in Miasma stream battles in the Snowfields outside of Rivelgauge Monastery. He can attack with a giant club, a Fire Breath attack, and can also use a powerful Meteor spell. The best way to deal damage against him is drilling him in the snow with a kinetic attack right after he attacks with his club, and breaking his horn with a homing body slam to the head. The horn can then be thrown at him or used to cast a smaller version of Meteor, both dealing moderate damage. The meteors King Behemoth summons can also be grabbed to attack him and others with.

If the player is lucky, they can get rare materials, including Dark Matter (from a horn) or a Ribbon, needed to craft powerful accessories.

There are also several achievements that can be unlocked during this battle, such as:

This section about an enemy in Final Fantasy Crystal Chronicles: The Crystal Bearers is empty or needs to be expanded. You can help the Final Fantasy Wiki by expanding it.
Retrieved from "https://finalfantasy.fandom.com/wiki/King_Behemoth_(The_Crystal_Bearers)?oldid=3239621"
Community content is available under CC-BY-SA unless otherwise noted.