Cid Pollendina: Oh, shut up and help me remodel the King's Knight -Wrath of the Dark Dragon- page!
Please expand this article into a full one. The following tasks need to be completed:This request can be discussed on the associated discussion page. Remove this notice upon completion.

Android, iOS
King's Knight -Wrath of the Dark Dragon- was an online vertical scrolling shooter set in the Final Fantasy XV Universe. It was an expansion of the 1986 Square Co., Ltd. title King's Knight. It was announced during Square Enix's Active Time Report during the 2016 Tokyo Games Show. It was a free-to-play game on Android and iOS platforms. It is referenced in Final Fantasy XV, as a game enjoyed by Noctis Lucis Caelum and his friends. It was soft launched on the Australian app stores for iOS and Android on October 28, 2016, and fully released worldwide on September 13, 2017. The game terminated in-game purchases on March 26, 2018, and ended services entirely on June 26, 2018 (UTC) via infrastructure and client updates.[1] Square Enix stated in-game that it would not be able to provide sufficient quality-of-service to maintain the game long-term, but that it would deliver new content until end-of-service. As of Spring 2019, the client app was removed from all app stores.

A mission-based scrolling shooter with customizable units, Wrath of the Dark Dragon had players automatically progress forward through each area while avoiding projectiles and destroying environmental barriers and enemies. Some missions had traps and floor panels that provided varying advantages and disadvantages. The game also featured a multiplayer mode that was playable by up to four players.

Scores for each playable zone were based on the scale of destruction wrought throughout the zone, with bonuses awarded for objectives such as defeating all enemies in the zone or not taking damage. Further, each playable zone had three target scores and three collectible medals; meeting the targets would reward the player with in-game currency and other items.

6th Moon of the Luvan Year 320
The Dark Dragon Tolfidan appears from the nether and conquers the kingdom of Izander. Seeking further conquest, Tolfidan then abducts Princess Claire of Olthea as an inital act of aggression against the neighboring kingdom.
Meanwhile in Olthea, four brave souls receive the blessing of the time god Khalam, and embark on a quest to rescue the captured princess.
After numerous trials and tribulations, the four heroes arrive at the gates of Tolfidan's stronghold...

The story takes place in the kingdom of Izander, where the evil dragon Tolfidan has kidnapped Princess Claire of Olthea. Four chosen heroes set forth to attack Gargatua Castle and rescue the princess. 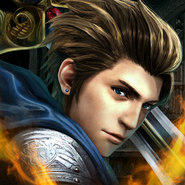