Kimahri is able to use his Lancet ability to learn new Ronso Rage Overdrives. He starts off with the classic Jump. Gaining a new ability instantly fills his Overdrive bar. When counterattacking Kimahri swings his spear upward upon the fiend regardless of whether they are on the ground or in the air. His victory pose is to stick his spear into the ground.

Kimahri's section of the Sphere Grid reflects his nature as a Blue Mage: in both the standard and expert kinds of the grid, he has average stats with little growth on his section, but can easily enter any other character's section and "learn" their way of fighting, being the easiest character to customize.

Kimahri can equip spears and armlets. He is one of two characters (the other being Wakka) to join with no armor equipped. He and Auron are the only characters to have the Piercing ability on the majority of their weapons from the start. His Celestial Weapon is the Spirit Lance. Fully upgraded, the Spirit Lance has the abilities Break Damage Limit, Triple Overdrive, Double AP, and Evade & Counter. The Spirit Lance does more damage the closer Kimahri is to his max HP.

Battle against Biran and YenkeEdit 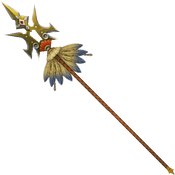 Kimahri can be fought in the Fiend Arena as a boss. During the battle he is paired up with Lulu.

Kimahri can be recruited as a party member through the Creature Creator system. To recruit Kimahri the player must set up a Special Monster Pod in Mt. Gagazet during a New Game Plus file. The abilities Kimahri can naturally learn are Jump, Nova, and White Wind. Like all monster allies, Kimahri can use any of the common dresspheres and he is controlled by the game's AI.

In Chapters 1 and 2, when the player talks to certain Ronso and a choice window pops up, choosing "correct" answers will affect the optional boss battle at Mt. Gagazet in Chapter 3. Choosing the correct answer when talking to Kimahri in Chapter 2 will also grant a scene in which he gives the Gullwings the Trainer dressphere.