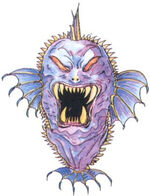 Killer Fish (キラーフィッシュ, Kirā Fisshu?), also known as Ichthious, KilrFish, Caribe, Pike, Fly Killer, and Ichthon, is a recurring enemy in the series. They often attacking in large numbers, but are generally weak enemies that shouldn't pose any threat to the player in any game.

The Killer Fish is an enemy fought when sailing the seas before obtaining the Ultima Tome. They attack in large groups, but are otherwise weak and fall easily to Lightning-elemental attacks.

The Killer Fish is an enemy fought on the Inner Sea on the Floating Continent. They are of no threat to the player.

The Killer Fish appears as an enemy fought at the Underground Waterway and around the Damcyan and Mysidia areas. They fight using only decently powerful physical attacks, but are vulnerable to Lightning attacks and thus can be defeated easily.

The Killer Fish returns as an enemy fought in Yang's tale at the Impact Crater and in his Challenge Dungeon, in Palom's tale in the Troia Castle Waterway, and in Porom's tale in the Underground Waterway. They are identical to their previous incarnation.

The Ichthon is an enemy fought within the Dalmasca Estersand, Garamsythe Waterway, and Giza Plains, often fought in pairs and will not attack the player unless attacked first. They primarily attack using Lunge and Water Cannon.

The Ichthious is an enemy fought within the Snowfly Forest, posing little threat to the player.

Final Fantasy: The 4 Heroes of LightEdit

Ichthon is an enemy that can be encountered at sea when the player is on the world map. It is later encountered at the Moonsand Ruins during Part II.

The Killer Fish is fought within the Pirate Hideout, and often in groups. However, they are not very powerful and can be fell in a few attacks.

This gallery is incomplete and requires Final Fantasy Brave Exvius added. You can help the Final Fantasy Wiki by uploading images.
Enemies
Retrieved from "https://finalfantasy.fandom.com/wiki/Killer_Fish?oldid=3244280"
Community content is available under CC-BY-SA unless otherwise noted.